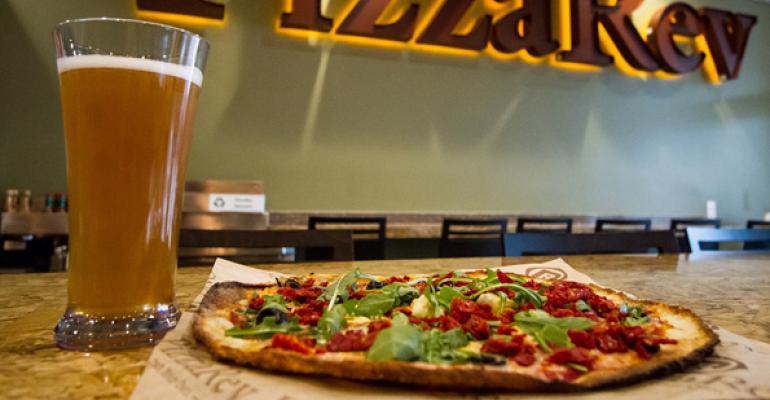 The Story: On the surface, Zuckerman and Eckerman, music industry power players and the former co-c.e.o.s of Clear Channel Music, seem an odd pair to be starting a pizza company. But their sons bring restaurant experience to the team. Jeffrey Zuckerman serves as chief marketing officer, and chief operating officer Nicholas Eckerman knows quality and customer service from his days working for Ritz-Carlton.

The entry into the space comes with a similar story: They loved pizza and the Chipotle model and saw a huge opportunity. They believe they can do it better with what Zuckerman calls the “total package” of top-quality design, service, food and overall experience.

With three stores already open, the team got a boost of money and credibility in March when Buffalo Wild Wings took a minority position in the company. The investment will help fuel more corporate development in the near term, and with the wing king’s approximate 1,000 units in the U.S. and Canada, franchising appears in play long term.

Zuckerman, Eckerman and sons “run operations on a day to day basis, but [Buffalo Wild Wings'] input is mutually accepted,” Zuckerman says. “We couldn’t be happier using it.”

PizzaRev’s first three locations were opened in unique markets to find out what works best. The result? The one next to a university (California State University in Northridge), in a business district (Woodland Hills) and more residential (Studio City) are all successful. “Now we feel we can go into any kind of area with critical mass,” Zuckerman says.

Basic Price: The 11-inch “Roman”-style ultra-thin cheese pizza is $5.95 and the create-your-own option is $7.95 with unlimited toppings.

Growth Plan: All the stores are corporate owned, and Zuckerman says that will be the plan going forward, although franchising will be considered.