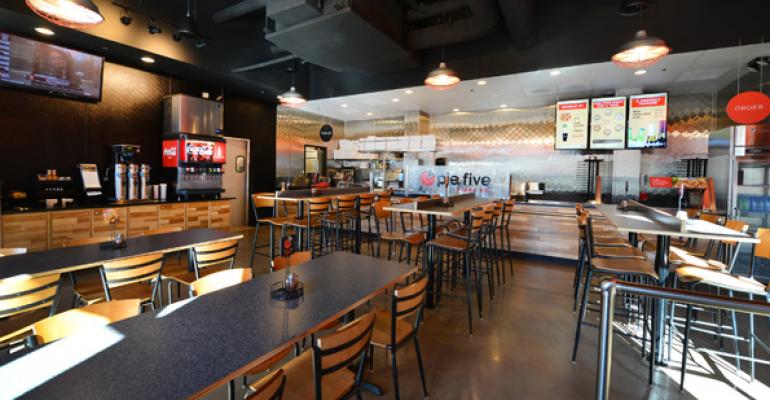 Home Base: The Colony, Texas

The Story: Pie Five has a little bit of an advantage compared to some  of its fast-casual competitors. It has the backing of a parent company with the experience and resources to grow and run a brand of 300 locations (Pizza Inn), not to mention a contact list for potential franchisees.

The first nine locations were all company owned, but the franchise engine is revving up. In April, outside Salt Lake City, the first franchised location opened a week after news that former Applebee’s c.e.o. Dave Goebel signed a deal for 10 franchise units in the Kansas City market.

“We are only looking for prior restaurant operators,” said Madison Jobe, Pizza Inn Holdings chief development officer, during a panel discussion at the NRA Show. “This is not a restaurant in a box manual, because we assume and screen for that level of knowledge.”

Pie Five has franchise agreements for 64 more restaurants in Utah, North Carolina, Florida, Texas and Missouri and an eye for even more.

"We now have nine company-owned Pie Five restaurants operating in different types of trade areas across the Dallas-Ft. Worth market and several more in development,” said Randy Gier, Pizza Inn Holdings c.e.o., in reporting the financial results after the most recent fiscal quarter. “Our experience operating these restaurants has provided us with valuable learning to drive the success of future company and franchise restaurants as we accelerate into our next phase of development."

Growth Plan: Pie Five’s goal is to double new openings annually, says a corporate spokesperson. It will grow through both franchising and investing in company-owned stores.