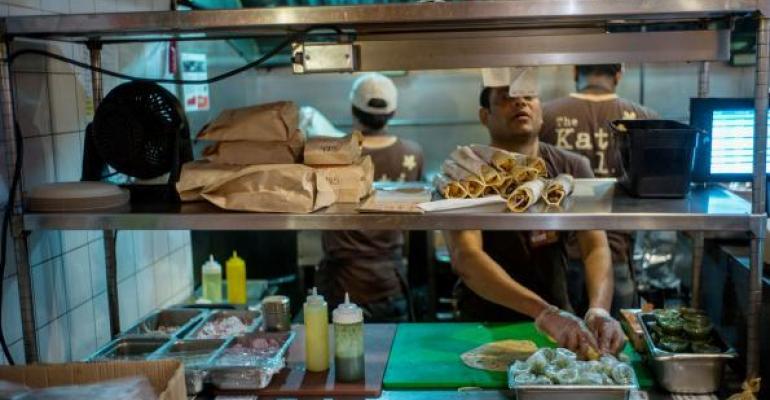 Payal Saha’s craving for a taste of home has turned into an expanding restaurant chain.

Saha's fifth Kati Roll Company restaurant is slated to open Wednesday in New York City’s East Village. Plans are underway for a location farther uptown in Manhattan, near Columbia University, and one in Princeton, N.J.

Kati rolls fit well into the trend of menu items that are convenient and approachable, while also being a little exotic.

Developed in Kolkata, India, kati rolls are traditionally made with marinated meats or spiced potatoes rolled in a flaky flatbread called a paratha. They’re fast, convenient and have a passing resemblance to burritos.

“I love kati rolls,” said Saha, a native of Kolkata. “I grew up eating them, and there was nothing like it here.”

Noticing New Yorkers’ growing penchant for culinary adventure, she opened her first location in a 300-square-foot space near New York University in 2002, and has gradually built a following. Over the years, Saha opened two locations in Midtown Manhattan and one in London.

The menu has evolved. Saha added a roll with the mild, fresh cheese paneer — also now available in Kolkata, she said — as well as mixed vegetable croquettes that are sold as a street food in Kolkata. She decided to crush them and roll them in a paratha. She also introduced kati rolls with shrimp and shami, a soft patty of lamb and lentils. Kati rolls are traditionally made with marinated meats or spiced potatoes rolled in a flaky flatbread called a paratha.

For customers interested in healthful options, the rolls are available in whole-wheat griddled rotis.

The Kati Roll Company also offers a growing array of lassis, a yogurt-based drink traditionally made with mango. But Saha is rolling out other flavors like mixed berry, saffron-pistachio and orange blossom.

“We started making it out of organic yogurt,” said Saha’s husband Anil Bathwal, who quit his job as an advertising executive to join his wife in running the restaurants full time. “So all the latest additions have more wholesome, good-tasting items, and we don’t skimp on things like saffron. We put the real stuff in.”

Bathwal added that the combination of kati rolls and lassis is similar to another burgeoning New York-based fast-casual chain.

“It’s almost like Shake Shack, with burgers and concretes,” he said.

Kati rolls range in price from $3.50 for a simple egg-stuffed Unda Roll, to $6.75 for one stuffed with shrimp marinated in coconut milk and spices. Lassis are priced at $4.

Lassis are now being made at the chain’s commissary in the Bronx, which opened this summer. That's also where meats are marinated and dough is prepared and rolled. The meats are skewered and cooked, and the breads are baked on-site at each restaurant.

With the opening of its latest restaurant, the Kati Roll Company is introducing a new Kosha Mangsho Roll, made with slow-cooked, pulled goat meat.

Plans are also underway to introduce a Staff Roll that’s unique to each restaurant, and, as the name suggests, is developed by the staff at each location.

Bathwal said he hoped those rolls would help keep the restaurants from looking too much like they were part of a big corporate chain, and, as it expands beyond New York, to reflect local tastes and ingredients.

Saha and Bathwal are currently exploring options for expansion, possibly by contracting national manufacturers to prepare their fillings, or to set up a hub-and-spoke model, with commissaries in each market supplying restaurants.

Bathwal said the Bronx facility could service locations within a two-hour drive, but beyond that they would have to consider other options.

He added that he wanted to make sure the chain expanded in a sustainable fashion.

“Expanding fast is easy; sustaining it is hard,” Bathwal said.