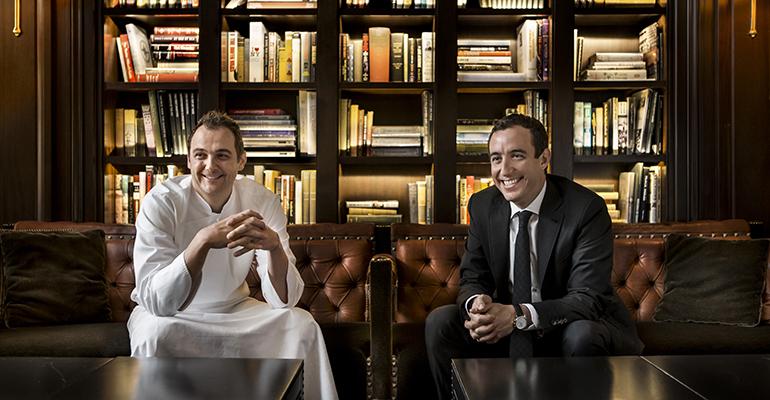 Make It Nice
Co-owners Daniel Humm, left, and Will Guidara, right, in the library of The NoMad Restaurant in New York City.
Trends>New Restaurant Concepts

The long-awaited fast-casual concept from the partners behind the high-end Eleven Madison Park and NoMad restaurants in New York City is close to its debut.

Daniel Humm and Will Guidara, partners in the growing multiconcept group Make It Nice, based in New York, are scheduled to launch the restaurant Made Nice by the end of February. The counter-service concept emphasizes fresh, seasonal ingredients using the same cooking techniques as the group’s higher-end restaurants.

Located next to the NoMad Bar in Manhattan, Made Nice will feature a menu of eight to 10 composed dishes, according to press materials, although further details were not available. Beverages will include housemade sodas and an abridged list of beer and wine on tap.

Made Nice is one of a number of concepts Humm and Guidara have in the works over the next two years.

Officials with Westfield World Trade Center recently said that the Make It Nice group will open a 7,000-square-foot casual restaurant in 2018 at the 16-acre property overlooking the Oculus, the World Trade Center’s transportation and shopping hub in New York City.

In addition, the group is reportedly bringing the NoMad restaurant and hotel concept to Los Angeles this year.

Humm and Guidara are also developing a two-story restaurant at 425 Park Avenue, in New York, scheduled to open in 2019, according to the New York Times.

Make It Nice is among a growing number of high-end restaurant operators spinning off fast-casual variations.