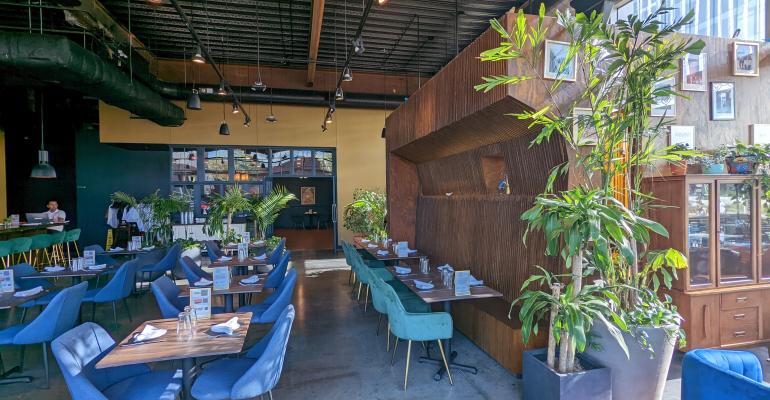 The Nepalese immigrant is providing Nebraskans with sushi, momos and Indian food

Diwesh Bhattarai came to Omaha, Neb., to study engineering, but instead he ended up owning restaurants. Now a partner in fast-casual sushi spot Nori at the city’s Inner Rail Food Hall and Nepalese dumpling concept Kathmandu Momo Station, he opened his first full-service restaurant, Saffron Urban Indian Kitchen, in January, and is planning to expand it with a separate whiskey bar.

“I always wanted to have my own restaurant,” said Bhattarai, who owns Saffron with partners Sagar Gurung, Rakendra Shrestha and Oliva Shakya. “This is a perfect spot, and we didn’t want to miss the opportunity for this space.”

Bhattarai developed an interest in cooking while pursuing his engineering degree at Bellevue University in an Omaha suburb, when he took part-time jobs in restaurants. He ended up not completing his studies at Bellevue and instead got a culinary degree at Metropolitan Community College in Omaha. He worked in the kitchen of a local Indian restaurant before opening his own concepts.

At Saffron, “The food I make is pretty much what I grew up eating on the streets and at home,” said Bhattarai, who grew up near Nepal’s border with India. “We have a lot of spices and a lot of rice items.”

That includes the popular beef vindaloo and chicken biryani, as well as curried salmon, masala crabcakes and tandoori chicken.

“We do get a lot of customers who have never tasted Indian food,” Bhattarai said. “Servers must talk to them and try to understand what their palate is, and also [describe] the way a protein is cooked so we can make the right recommendations.”

For Bhattarai, introducing first-time customers to this cuisine has been deeply satisfying. He said he also appreciates the opportunity to interact with customers from the restaurant’s open kitchen, while offering them an opportunity to see cooks at work.

The restaurant’s primary dining space seats 80 people and an event space accommodates 30-40 additional guests. There’s also a patio with seats for about 30 more people. The average ticket price per customer runs around $60-$80.

Bhattarai had a specific aesthetic in mind when he designed Saffron.

“We wanted to include as many real plants as we could,” he said. “We want it to feel like you’re in nature. We have high ceilings too, which makes the space feel huge. The vestibule is made with natural wood and our architect made custom wood booth space that matches the wood bar counter.”

There’s an Indian twist to many of Saffron’s cocktails, such as the Bombay Old-Fashioned made with bourbon, chocolate bitters, orange and chai.

“Basically, Sagar [Gurung] did the bar and then we had a bartender out of Miami who was our consultant for a little bit and curated cocktails for us,” Bhattarai said. “He comes once in a while to check everything, too.”

Bhattarai and his partners are now awaiting some art from Bangkok, Thailand, to open the Maharaja Whiskey Room within Saffron.

“In Nepal and India, the kings’ preferred beverage was usually whiskey,” Bhattarai said, noting that “maharaja” means king. “We are working on a small library for the whiskey, and we will have a whiskey sommelier who will create events, publicized through social media. If there are no events, customers may also dine in the whiskey room.”

Although Bhattarai did not complete his engineering degree, he said his studies were beneficial, nonetheless.

“When I was doing computer science, it definitely broadened my vision.” He said. “It helped me grow as a person and helped me to not be scared to follow my passion.”