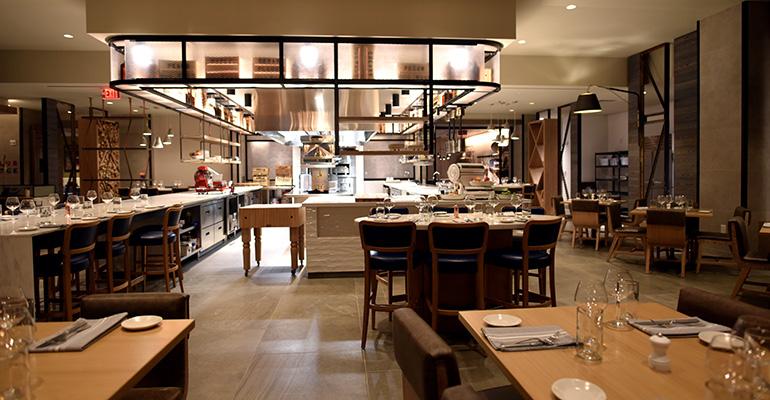 <p>Most tables have a clear view of the kitchen goings on at Stoke.</p>
Trends>New Restaurant Concepts

Cooks part of an interactive experience at Stoke

Chefs can’t afford to be shy at Stoke, which opened recently in the Uptown district of Charlotte, N.C.

The open-plan dining room’s 70 seats form a circle circle around the cooking line, and a counter gives eight lucky guests an up-close-and-personal view of the kitchen proceedings. Inside the kitchen sit stacks of beechwood ready to stoke the dual-entry oven that drives the menu.

Chefs at Stoke join the servers getting some of the plates to tables, and “there’s a good bit of interaction” between the cooking staff and guests,” says executive chef Chris Coleman. Apart from the counter, “every table kind of serves as a chef’s table,” he explains.

With the most remote table located only about 50 feet from the cooking stage, “someone might shout over ‘How’s that steak?’ or ‘Are you enjoying the succotash,” he says.

“It’s playful, loose and relaxed, and we have this kind of banter between the cooks and the guests.”

It’s no simple task to find cooks comfortable with that kind of interaction, but it’s not impossible, either.

“It takes a certain kind of person to be a cook and a lot of them have a big ego,” Coleman notes. “They like to talk about what they’ve just made.”

Just in case, though, a personality test is part of the applicant screening process to make sure they can hold their own in the kitchen as well as among customers.

Fortunately, there’s plenty to talk about when it comes to Stoke’s menu, which leverages Coleman’s longstanding relationships with local purveyors. Popular dishes include a Sticky Pork Shank ($22), which is brined for two days, then braised, then fried, then coated with a chili/orange juice/sorghum molasses glaze. Iron Skillet Mountain Trout ($18) from Sunburst Farms in North Carolina is served with a Southern-style salsa verde. And the most popular choice is the $12 burger, a grind of Meyers pastured beef matched with local buttercup cheese and bacon jam. It’s served at the 80-seat bar and during lunch.

But the highlight for many could well be one dessert, a one-pound donut served with diplomat cream and Heath bar crumble. Coleman created it to complement the rest of the menu, which is intended for family-style service.

The donut, big enough to feed eight, is crafted from brioche and takes 10 minutes to fry. "We actually serve it with a steak knife. It’s as big as a steering wheel,” he says.

At $18, it’s a bit pricey, but that hasn’t dampened enthusiasm. “People are cutting slices and eating it like a piece of cake,” Coleman says.