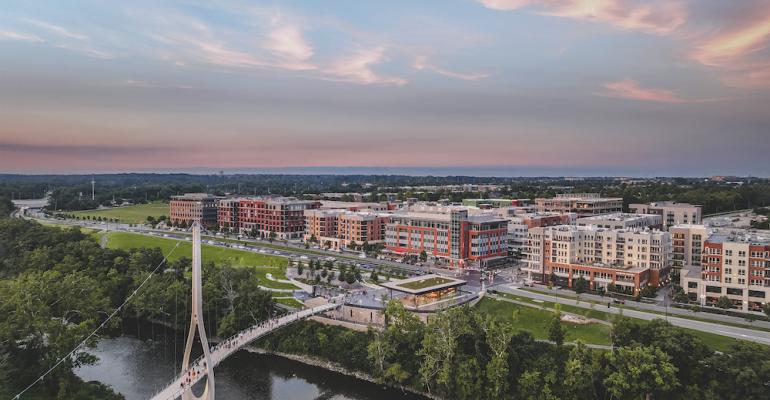 While restaurateur Cameron Mitchell has worked with hotels before, for the first time he is part of the master culinary plan for one, bringing his signature brand to the Bridge Park Hotel in Dublin, Ohio.

"We are still in the early stages of curating the food and beverage program, but our goal is to create spaces for the entire community, from hotel and event guests to neighbors in Dublin and owners of the hotel’s residences," said Mitchell, founder and CEO of Cameron Mitchell Restaurants. "Travel and experiencing luxury boutique hotels are passions of mine and I’ve thought it would be a natural extension of our hospitality business."

Mitchell said managing and operating a hotel has long been a goal, ever since he interned for Hyatt Hotels while attending The Culinary Institute of America in Hyde Park, N.Y. Later, he worked at the Grand Hyatt Manhattan, and, after spending decades traveling and running restaurants, he is ready to stake a claim in his own hotel.

Over the past 30 years, Columbus, Ohio-based CMR has run more than 60 restaurants nationwide, including multiple Ocean Prime locations, Molly Woo's Asian Bistro, Hudson 29, Marcella's, and more. The only restaurant the group operates in a hotel is The Guild House, which is at The Méridien Columbus, The Joseph.

Mitchell’s involvement with the Bridge Park Hotel comes thanks to Brent Crawford, principal and founder of property development company Crawford Hoying, who is a member of CMR’s advisory board and developer of the Bridge Park property development that will include the new hotel. Over a cocktail, Crawford and Mitchell realized they both had the same goal of going into luxury hotels.

"Brent knows development and the hotel industry, and I know the luxury and food & beverage industries," said Mitchell. "Since Brent owns the Bridge Park development, we decided this was the perfect project to partner on."

Bridge Park is a mixed-use expanse of shops, eateries, a conference center, and multiple outdoor areas as well as the upcoming hotel, which its owners anticipate will open in the spring. CMR will handle all the food and beverage in the hotel, including the upcoming breakfast and lunch venue, rooftop bar, a Champagne bar, catering, events, and room service. So far the only concept to be fully announced is an Italian restaurant and pizzeria named Valentina's.

There are also plans to also launch a fine-dining concept with an average check of around $100 per person that will offer diners a view of the city. The hotel will also have 140 guest rooms and 20 luxury residences.

"Our restaurant will have prime visibility, and there will be a grand entrance to the hotel and an open and lively lobby which will serve as the hub for locals and visitors alike,” Mitchell said.

"We envision thousands of guests streaming through the high energy lobby daily, and, depending on whether they are there for leisure or business, can move from one concept to another in one visit."