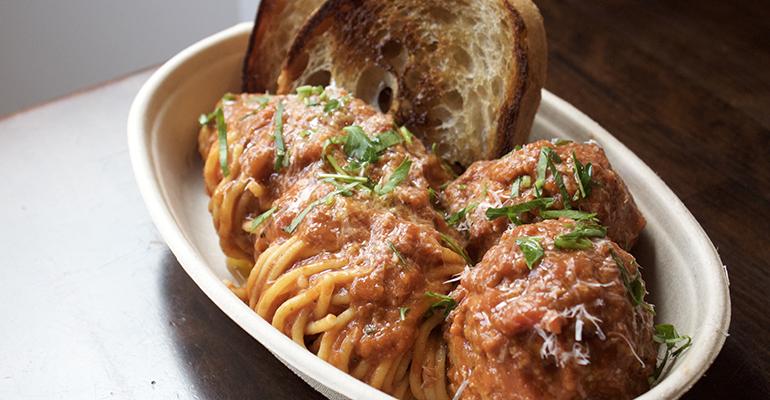 After building a reputation for higher-end Italian fare spotlighting the best of local and sustainable ingredients, Los Angeles chef Bruce Kalman is ready to throw back to the more casual Italian-American dishes of his youth in New Jersey.

Kalman and business partner Marie Petulla are scheduled to open, at the end of January, the new Knead & Co. Pasta Bar + Market, an outlet in the bustling Grand Central Market, a food hall in downtown L.A.

Open for breakfast, lunch and dinner, Knead & Co. will include a 16-seat bar overlooking an open kitchen and “pasta lab,” where guests can watch the pastas being made. The market will also sell Kalman’s sauces, pastas and other ingredients, like his house-made giardiniere, ricotta and cultured butter.

Kalman and Petulla also own the two-year-old restaurant Union in Pasadena, offering a seasonally Californian take on Northern Italian cuisine. Some of the dishes at Knead & Co. will be “Union-esque,” or more creative, like Spelt Cavatelli with spicy fennel sausage, Koda Farms chickpeas and rapini.

Kalman trained at Spiaggia in Chicago and later took executive chef roles at Il Piatto in Santa Fe, NM, and Chelsea’s Kitchen in Phoenix. He moved to L.A. to open The Misfit in Santa Monica and later helmed the kitchen at The Churchill in West Hollywood.

How would you describe the concept?

It’s about really great ingredient-driven food, with a pasta-driven menu and a lot of Italian-American influence from my East Coast roots in Jersey.

The idea of calling it elevated American Italian is that we make baked ziti, but it’s ziti that we make in house from grain that’s grown in California or nearby, that’s milled locally for us, and the tomatoes are from Southern California and I know the guy who sells to the company. It’s really high-quality ingredients.

Yes, it was my first job at 13. My Dad’s friend opened a pizzeria in Paramus. I started in the back in the kitchen doing prep and basically picking up all the food except pizzas. Baked ziti was one of the first things I learned how to make.

It’s a simple raviolo with egg yolk with ricotta and kale, and it has just one bar of raviolo. It’s baked with peppers, onions and tomatoes. It definitely doesn’t suck.

And we’re excited about the frittata, which I’m calling an Italian omelet to make it more approachable and understandable for people. We’re featuring local goat cheese and right now we have broccoli di cicco from a farm in Ojai. Our mantra is working with these great, amazing ingredients.

Was breakfast a result of the location or did you want to make the point that an Italian breakfast is as great a daypart as lunch or dinner?

It’s a little bit of both. The market opens at 8 a.m., so why wouldn’t we open at breakfast? And I love the food, the pastries. In Italy, breakfast is walking into an espresso bar and having your shot and you leave. Everything is transient food. You need to be able to pick it up and walk away with it.  So what we’ll have for breakfast is that.

What else would you point to on the menu?

The spaghetti with Sunday gravy and meatballs is a home run. We have a porchetta dip au jus with spicy giardiniere sandwich that we’re excited about.

On the lighter side, we’re doing grain bowls, with beautiful black barley and rye. In that market there’s a lack of healthier, lighter items for sale, so we wanted to have that as well to offer balance. We don’t want it to be all pasta.