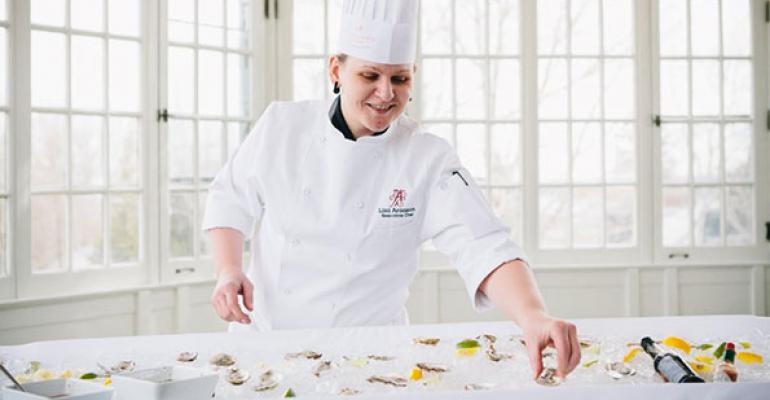 Braxton’s entwines itself in maritime community

Chef Lisa Aronson walks out of the kitchen for a table visit with some VIP diners. The guests ask about the fresh catches of the day, and Aronson pulls out her cell phone. She’s got a photo of the halibut she bought off the boat earlier in the day from Spear’s Fishing, a two-person, family-owned fishery down the street.

She informs the diners that she also picked up some fresh lobster and scallops—and she can tell them from what part of the Bay of Fundy they came. The halibut becomes dinner.

Aronson is executive chef at Braxton's Restaurant & Bar, the new restaurant inside the iconic Algonquin Resort St. Andrews By-The-Sea in St. Andrews, New Brunswick, Canada. The resort is emerging from a top-to-bottom renovation and Braxton’s debuted in March, just in time for the vibrant resort community’s peak season. Aronson, who has worked at the hotel since moving to St. Andrews in 2007, was named executive chef in January. She says she didn’t quite understand the stature of the Algonquin in St. Andrews until she arrived to see it in person. “It’s the heart of the community,” she says, “and you don’t get a sense of it until you’re here.”

The century-old resort—which has hosted royalty from all over the world, including Prince Charles and Princess Diana and several U.S. presidents—remains the anchor of St. Andrews. Everyone in the 2,500-person community knows the resort, and if you’ve come for whale watching, lobster fishing or the vibrant arts scene, the Algonquin is most likely where you’ll stay. So when the resort owners set out to reimagine the restaurant and overall resort dining experience, one of the main tasks was to ensure St. Andrews’ cultural flavor was embedded throughout the guest experience. 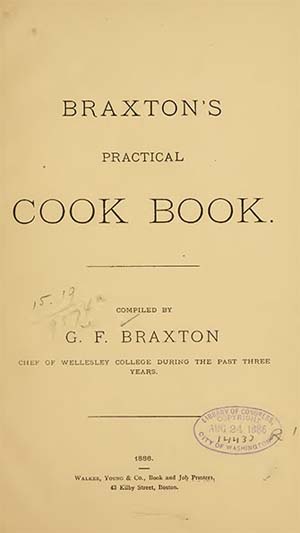 “Anybody can go in and buy things from local providers,” Aronson says. “But it’s getting to know the fishermen. It’s not just a trend; its something we should’ve been doing long ago.”

Aronson buys her vegetables from the organic farm within walking distance, and in return the farmer occasionally plays classical music in the hotel lobby. The resort has its own bees on site for honey. The local coffee shop, Honeybeans Coffee Tea & Treats, has developed a custom blend for Braxton’s. The local tea and soap shop has blended a house tea.

“It’s a great way to tell the story of our local vendors,” Aronson says. “They don’t get their story told very often.”

At the end of the day, it’s quality that leads Braxton’s and the Algonquin to source locally. “We wouldn’t use them if we didn’t think they were the best,” says g.m. Tim Ostrem.

Braxton's is considered “up casual,” Ostrem says, and expands out to a patio and fire pit. Guests are welcomed by a large bowl of saltwater taffy and tables are adorned with small driftwood sculptures. “Just the design alone, all the way down to the accent pieces, really give the feel of the community,” Ostrem says. Braxton’s serves breakfast, lunch and dinner seven days a week with seafood as its signature. At the bar, guests enjoy locally sourced charcuterie and tuna tacos, for example. In the more traditional dining room, signature dishes are locally sourced scallops and lamb Wellington.

Even the story behind the restaurant’s name is a unique tribute to the local community. George Braxton was a chef at Wellesley College outside of Boston in the late 1800s who later became chef at the Algonquin, where he was one of the first African American chefs to head up a luxury resort. While at Wellesley, Braxton wrote a cookbook humbly titled Braxton’s Practical Cook Book that focused on simple cuisine with regional ingredients. The cookbook—one of the first ever written by an African American—embodied what Ostrem and the resort owners were looking for in their relaunched restaurant.

“George Braxton is a story most of the folks in the community didn’t know. Not only did it allow us to celebrate our past but tell people a new story,” Ostrem says. “His cookbook really became our philosophy.”

Aronson regularly thumbs through a hard copy of the cookbook and has taken away inspiration for many of today’s dishes. “I was given the book early on and it really gave me a feel for who he was,” she says. “I don’t follow his recipes exactly, but I take certain things from them.”

For example, the lamb Wellington is a variation on Braxton’s beef Wellington recipe, with one meat swapped for another and served it over a bed of chickpeas. Another is a play on George Braxton’s shrimp and grits recipe, now topped with fresh seared halibut and shrimp. There are 32 pie recipes in Braxton’s Cook Book, so Braxton’s restaurant naturally will have a seasonal pie selection.

If it’s on the menu at Braxton’s, it tells the story of the region, Ostrem says. “Everyone knows a fish taco, but you know the halibut here is locally sourced and that helps tell the story,” he says. “A lot of restaurants have lobster but don’t have lobster cake sliders (see recipe). Our charcuterie, featuring a coffee duck prosciutto, really is just a plate featuring locally sourced and in-house prepared meats.”

In St. Andrews, the Algonquin is one of the only places to stay. So instead of competing for market share from nearby resorts or hotels, ownership is instead selling St. Andrews as a destination, which makes the Algonquin and Braxton’s a natural fit to become entwined in the community.

Kerry Heffernan demonstrates how to eat an oyster
Jul 01, 2022