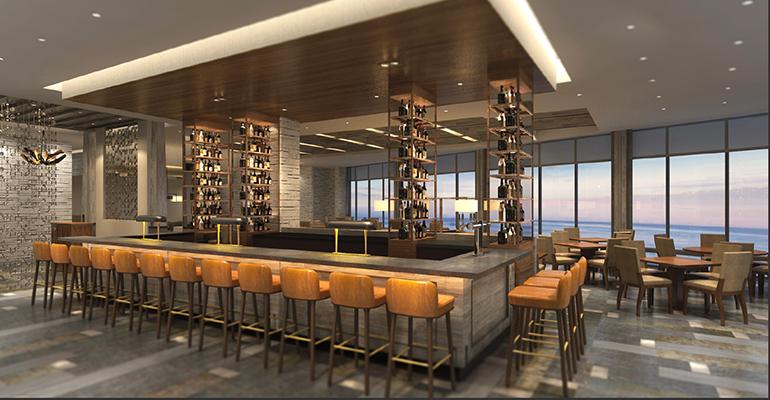 <p>Rendering of the bar at Bluegold, opening this month in Huntington Beach, Calif.</p>
Trends>New Restaurant Concepts

Blackhouse Hospitality Group is hoping to spike the punchbowl a bit when it opens the new Bluegold restaurant this month in Huntington Beach, Calif.

The 8,800-square-foot restaurant in the Pacific City lifestyle center will feature stunning views overlooking the Pacific Ocean and a contemporary menu of seafood and steaks, with about 230 seats, said Jed Sanford, CEO of Hermosa Beach, Calif.-based Blackhouse.

Tucked inside Bluegold, however, will be something unexpected: a hidden 25-seat restaurant-within-a-restaurant called LSXO, a variation on one of Blackhouse’s other brands, Little Sister, which has two locations in the greater Los Angeles area.

There will be no separate signage or entrance for LSXO. Both restaurants will operate out of the same kitchen, though the menus will be completely different, he said.

Bluegold will have a traditional raw bar and steaks and seafood cooked over wood-fired grills.

LSXO, meanwhile, will focus on the cuisine of District 1 in Saigon, the hometown neighborhood of the family of Blackhouse chief operating officer and chef Tin Vuong, who heads the group’s culinary team. The Little Sister brand is known for its French Vietnamese menu, so LSXO follows the same inspiration. The LS stands for Little Sister, while the XO is a reference to Vuong’s signature sauce.

“LSXO will be hidden in that it’s not branded,” says Sanford. “You’ll see the entrance of it tucked into a section inside Bluegold, but you’ll have to know it’s there.”

It offers an air of mystery and something to spark word of mouth. But the fundamental goal is cross branding, Sanford notes.

With Bluegold, Blackhouse will have nine restaurants, all created within the past five years, including Abigaile, Wildcraft, Día de Campo, Steak and Whiskey, Ocean Bar & Lounge and Little Sister. The company also operates a wholesale bakery.

Last month, the group opened the new Suburbia restaurant in Redondo Beach, offering a blend of dishes from all the sister brands.

For Blackhouse, growth has occurred organically. But Sanford says the group has reached a point where the next stage of growth will leverage the infrastructure and layers of expertise the company has built.

“There are growing pains, and you have to think about how you go from running one restaurant to 10, and then from 10 to 20,” Sanford observes. “Really, it’s been a puzzle of finding the best way to structure the company as we grow.”

Blackhouse has collected a stable of kitchen, bar and operations specialists who will work across all of the company’s brands.

“Depending on their skills set, two or four people might work together developing concepts and they’ll move around. So we won’t see one person grinding away on one menu, which you often see in this industry,” he says.

The structure also gives restaurant-level hires a career path. Jorge Valines, for example, started as a chef at Abigaile and climbed the ranks. He’s now working with Vuong to develop the menu at Bluegold.

Blackhouse, meanwhile, is positioning itself to do more work with mixed-use developments like Pacific City, which will feature a collection of boutique restaurant and retail concepts, and eventually apartments and a hotel.

Blackhouse can fill that need, he added, but also offer the stability of infrastructure a larger chain restaurant might have. “It’s safety along with progressiveness in terms of cuisine,” he says.

With Bluegold open, Sanford expects Blackhouse will reach at least $20 million in sales across the portfolio.

“My objective is to knock Bluegold out of the park,” he notes. “Then we’ll take six to 12 months to regroup and absorb everything. Then I have some more projects coming for late 2017 or 2018.”