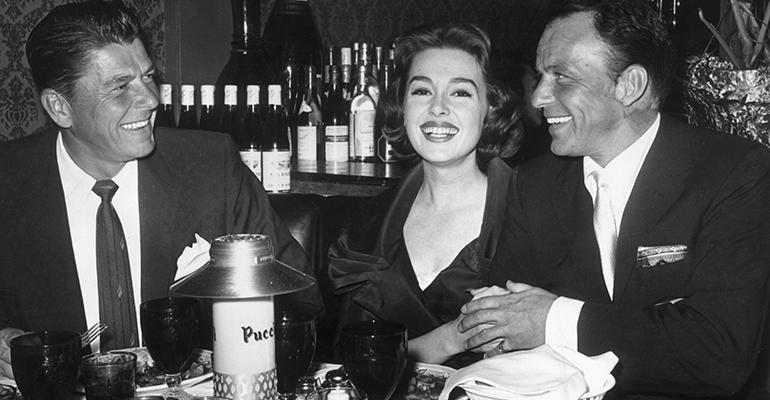 Frank Sinatra would have turned 100 this December 12 and a host of restaurants are throwing some real ring-a-ding events to celebrate. We think the Chairman of the Board would have approved.

An only child who grew up to hate eating alone, Sinatra was known to regularly bring groups of 20 to 30 whenever he dined out. But dinner was always on Frank, who was famous in hospitality circles for his over-the-top tips and the unique way he’d sometimes settle his checks: It’s said that after his parties left a restaurant, Sinatra’s guys would show up and hand the restaurateur a couple of bags of cash. (A recent New York Post article has this and other great tales of dining with Frank Sinatra.)

Frank’s favorite meal? Nothing fancy: pounded veal and a side of spaghetti with red sauce from Patsy’s in NYC. (Patsy’s is still around, and although the veal is not on the menu, if you want to eat like Frank, you can ask them to make it for you.)

Here are some of the ways restaurants are celebrating the 100th birthday of a cultural icon.

• The Golden Steer Steakhouse is one of just a few remaining Las Vegas restaurants in which Sinatra dined. It’s running a three-course menu based on what the entertainer ordered when he was a regular there during his 1960s Rat Pack days. The $100 per person “Frank’s Menu,” available throughout December, includes: seating for up to four at Sinatra’s regular booth as well as his regular order: red wine; clams casino; a 16-oz. New York strip, medium-rare with sautéed tomatoes, garlic and white wine; bananas Foster; and three fingers of Jack Daniels with two ice cubes. They’ll have a live musical tribute to Sinatra on Dec. 12, when the price per head at Frank’s table shoots up to “a minimum of $1,000” per reservation for the four-top.

• Little Nonna’s, an Italian-American staple in Philadelphia, is offering a four-course tasting menu of some of Old Blue Eyes' favorite dishes. It’s priced at $40 per person and runs Dec. 7–12. After a shared appetizer of Patsy’s stuffed artichoke hearts (inspired by one of Sinatra’s favorite NYC haunts) and garlic bread, guests can choose from clams Posillipo or macaroni and sausage in Dolly Sinatra’s marinara sauce; then move on to a third course of Frank’s chicken Vesuvio, veal with spaghetti or eggplant Parmesan. Desserts are lemon ricotta torte and pistachio cannoli.

• Sinatra at Encore in Las Vegas has been running a 100th birthday promotion all year with chef Theo Schoenegger’s menu based on Frank’s favorite dishes. On Dec. 12, the restaurant is offering a $195 per person, four-course dinner to honor “a true icon who will forever epitomize the American dream,” according to the Wynn website. Entrée choices include osso buco, capesante (grilled diver scallops), or branzino (Mediterranean sea bass). The restaurant’s signature dessert, a dark chocolate mousse that’s skillfully molded into the shape of Sinatra’s iconic fedora, wraps up the meal. A parting favor: guests take home the newest release of Frank’s greatest hits, a CD titled “Ultimate Sinatra.”

• Patsy’s in Manhattan is holding a five-day $175 prix fixe event, which has been sold out since last year’s celebration. The menu, prepared by Sal Scognamillo, grandson of founder and Sinatra friend Pasquale “Patsy” Scognamillo, includes fusilli with fileto di pomodoro and veal Milanese, sliced very thin, just the way Frank liked it.