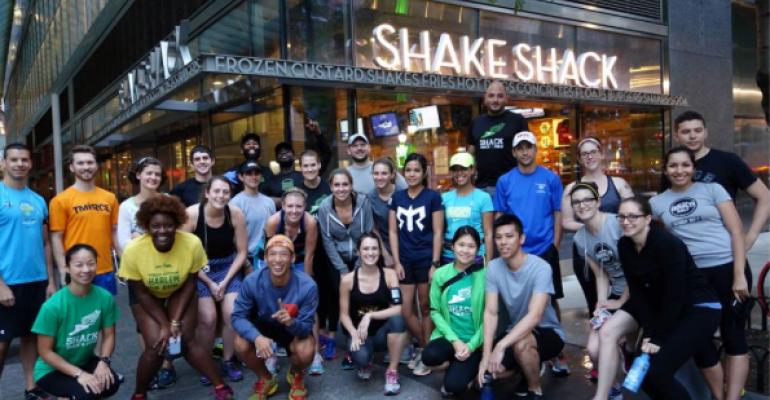 Restaurant industry analysts found lots to love in the initial public offering  documents Shake Shack filed with the Securities and Exchange Commission on Dec. 28. Wait until they learn more about Shake Track & Field, a community building effort that delivers crowds of customers during meal periods when business would otherwise be soft.

The IPO financials show that Shake Shack is highly profitable now and could produce near-exponential growth in the future. 2013 sales were $83 million, up 45 percent from the prior year, and profits were $5.4 million, up 31 percent. Operating margins? They’re 30.3 percent at New York City Shake Shack units, 21.9 percent elsewhere in the chain. The company owns and operates 31 domestic units, licenses five more in the U.S. and has 27 licensees around the world. Shake Shack aims to reach 450 U.S. units one day. Its next market: Austin, TX.

It’s challenging to do this, given Shake Shack’s fast casual price points—$4.95 for a single ShackBurger, $2.90 for crinkle-cut fries, $5.15 for a hand-spun shake. But the chain has pulled it off to the point where it’s nationally famous for its cult following and long lines. No wonder the IPO, which hopes to raise $100 million, would value the overall company at $1 billion.

Yet Shake Shack shares a problem with other burger segment players: It’s a lunch-heavy business that often has to work hard to fill seats at dinner. But once a month, several Shake Shake units fill to overflowing, thanks to the Shake Track & Field club.

What is it? “Shake Track & Field is a free community fitness club powered by Shake Shack,” the company says.

To participate, runners meet at designated running stores in New York City, Philadelphia and Washington DC once a month. Usually, it’s on the second Tuesday of the month, with the run starting at 7 p.m. After a three- to five-mile run, the runners finish up at a close-by Shake Shack, where they can get a free beverage—not just soft drinks, but beer, wine and shakes, too. Other menu items are full-price, and plenty of runners opt to refuel with a postrun burger at Shake Shack.

The idea began in Philadelphia. Shake Shack area manager Allen Ng tells Runners World the idea spread to NYC and Washington after a core group of about 50 runners became regulars in Philly.

“We have competitive runners, women who come out with girlfriends, and even some people who haven’t run before but want the free beer,” he says. Runners connect with the group via Facebook. The current page shows that two weeks prior to the next run on Jan. 13, 34 people have already signed up in Philadelphia, 42 members say they’ll be at the Washington run and plenty more will attend one of the two NYC runs. That’s a lot of people on a Tuesday night in January.

New York also offers a monthly 8:30 a.m. Saturday run on the Upper West Side plus another Saturday morning run that leaves from Madison Square Park, home of the original Shake Shack.

What’s available for nonrunners? Shack Track & Field has branched out to offer biking events in Center City Philadelphia and on the Upper West Side in New York. These weekend events are 40- to 45-mile no-drop rides that finish at a Shake Shack. There’s even a Yoga Edition that meets in Madison Square Park on the third Saturday of the month; it has moved inside for the winter.

In the IPO filing, Shake Shack c.e.o. Randy Garutti says that “every time we open a Shake Shack, it’s about creating that town’s community gathering place.” A lofty goal, but Shake Track & Field is an example of how that rhetoric becomes reality.

From the runners’ perspective it’s a workout that qualifies as a night on the town that someone else organizes, providing a free drink at a hip restaurant when it’s over. For Shake Shack, it brings in a crowd on a Tuesday night once a month and creates a strong and continuing bond with the young and fit.

Social media marketing has proven it can create a fan base for restaurants. But if operators want to build an even closer connection with customers who will show up and buy something on a regular basis, something akin to Shake Track & Field looks like a good place to start.