Food rewards, cyber sales and other tactics help boost volume during the holidays

The holidays are, without a doubt, the most popular time of the year for retailing gift cards, but they don’t sell themselves. Restaurants now compete with big-box stores and even online auction sites for gift card sales, so placing a tent card on your tabletops won’t cut it anymore.

Take a look at what some operators are doing to ensure guests purchase gift cards from their restaurant first this season.

1. Offer a food reward instead of money
At Saladworks, headquartered in Conshohocken, Pa., CMO Steve McMahon says that the brand is able to eliminate gift card price shoppers by offering something different than the competition. “Most chains promote gift cards by simply adding dollars to the card for free, which isn’t value-added and allows consumers to price-shop among brands,” says McMahon. “We differentiate our brand by offering a free salad with every gift card purchase, which creates a higher value perception in the mind of the consumer. As a result, the dollar value of our gift card activations in holiday 2015 was up more than 40 percent versus the prior year. This year, we’ve integrated our holiday gift card promotion into our digital loyalty app, Saladworks Rewards, and increased our social media presence to create more engagement with more guests.” 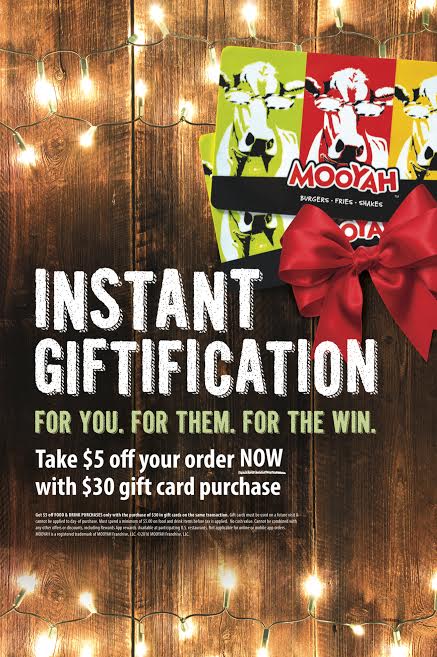 2. Show off your personality
It’s the holidays, so invite your staff to have a little fun with gift card sales. At Chicago-based Portillo’s, VP of marketing and public relations Nick Scarpino says the restaurant has had the most success selling gift cards through the company’s fast-moving drive-through lanes where team members provide menus, collect payment and deliver orders — sometimes all before a customer reaches the window. “Many of our Portillo’s team members will take a collector’s cup, Velcro it to their hat in the drive through and dangle gift cards like ornaments off of the cup in order to draw attention to the gift cards,” says Scarpino. “Due to this creative technique, more than 50 percent of Portillo’s yearly gift cards are sold during the holiday season.”

3. Take advantage of the Internet
Black Friday and Cyber Monday may be over, but don’t let that stop you from running your own one-day gift card sale online or in the restaurant. “This year we really honed in on the Black Friday craze and made a big digital push on the local level, and it paid off,” says Linsey Case, marketing manager for Cincinnati-based Buffalo Wings & Rings. “On Black Friday only, we offered a $10 bonus card with every $25 in gift card purchases, which we promoted via our Club ’84 eclub and heavily on local Facebook pages. We saw a 340 percent increase in the first week, with sales of just over 1,600 gift cards, and nearly 1,100 on Black Friday alone.”

4. Provide instant gratification
The holidays are all about giving, but most consumers also enjoy a good bit of receiving, too, which was the idea behind MOOYAH Burgers, Fries & Shakes’ Instant Gratification gift card promotion. The international burger chain has given away a free burger with purchase of a $25 gift card and $5 off food with a $30 gift card. “Our gift card sales for the system last year were, on average, 30 percent higher than 2014 gift card sales,” says Natalie Anderson Liu, VP of marketing. “We started off week one of the gift card program in 2015 at 59 percent higher than week one of 2014, and in the final week of the promotion, we had 60 percent higher sales than the last week of the promotion in 2014. Either way, it’s giving the guest that immediate reward that has led to our gift card success.”

Photos courtesy of Saladworks and Mooyah

Updated, Dec. 19, 2016: The first sentence has been changed in light of new data from First Data.