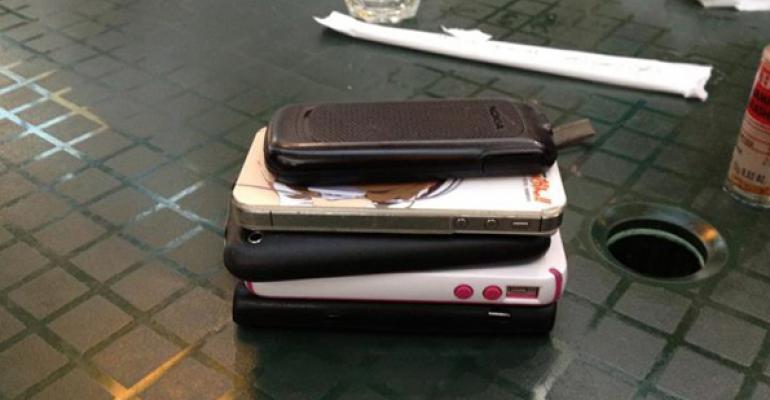 <p> The viral game Phone Stack asks that restaurant guests not touch their phones for the duration of a meal.</p>
Operations>Marketing

Use a smartphone to find a restaurant and maybe even pay the bill? Sure, but no texting or photo-taking while you eat!

Chef/owner Mark Gold really hit a nerve when he offered guests at his Eva Restaurant in Los Angeles a five percent discount if they’d forego smartphones while they dined. Massive national publicity resulted, seemingly all of it of the “here’s an idea whose time has come” camp.

Good for him. But if your restaurant has invested in a mobile website, done away with printed menus and wine lists in favor of iPads or installed pay-by-smartphone capability, you may wish to think it through before you make a similar move. Ask yourself: Are your customers are as crazy about dining room technology as you think? Or are an awful lot of them looking for a tech-free experience when they go out to eat?

We’ll leave it up to you to decide if the use of tech gear is an ambiance killer for your particular restaurant. But the outpouring of positive publicity Gold received tells us that, for many restaurants, a large swath of the customer base would like to see smartphones and other digital devices banned from dining rooms.

Gold, a chef at several of the Patina Group’s standout L.A. restaurants before striking out on his own, offers this deal to customers: Check your phone with an Eva staffer at the start of your meal and he’ll take five percent off your bill. So a customer who ordered Eva’s five-course tasting menu ($69) with a wine pairing ($45) would save between five and six dollars. It’s a modest incentive at these price points; roughly half of Eva’s customers take it.

The result has been a reduction in the amount of Tweeting and texting and photo snapping in Eva’s dining room. That’s what Gold wanted.

“For us, it’s really not about people disrupting other guests,” he tells radio station KPCC. “Eva is home, and we want to create that environment of home, and we want people to connect again. It’s about two people sitting together and just connecting, without the distraction of a phone, and we’re trying to create an ambience where you come in and really enjoy the experience and the food and the company.”

Restaurant operators might wish to consider the positive media reaction and level of customer acceptance Gold received as one indicator of how much digital connectivity their patrons really want—for themselves and others in the dining room. Keep this factor in mind as you investigate the use of QR codes, tablet menus and, coming soon if not already here, mobile apps that let customers pay via smartphones. McDonald’s, Starbucks and Dunkin’ Donuts have all recently rolled out mobile payment options for customers; apps tailored to independents and other full-service restaurants may be next.

But maybe you can leave it up to your customers to self-police their phone use. A game now going viral called Phone Stack addresses the issue in a fun way. Its rules call for restaurant guests to place their phones in the center of their table and not touch them during the duration of their meal. If anyone checks their phone during the meal, they have to pick up the check for the whole group.

1. The game starts after everyone has ordered.

2. Everybody places his or her phone on the table face down.

3. The first person to flip over their phone loses the game.

4. Loser of the game pays for the bill.

5. If the bill comes before anyone has flipped over his or her phone everybody is declared a winner and pays for his or her own meal.

Both Gold’s no-phone discount and Phone Stack’s game approach give operators a positive way to create a phone-free environment in their restaurant. Let’s hope customers embrace one or both of these methods for those restaurants eager to curb dining room cell phone use.

‘Meals on Heels’ brings the dine-in experience to delivery
Nov 17, 2020