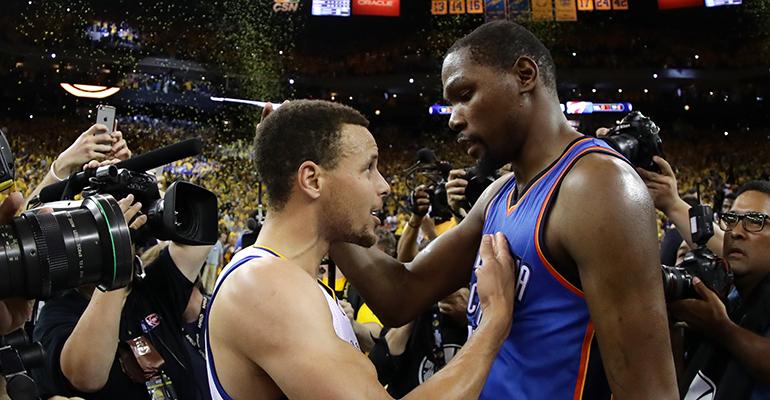 You think your operation has felt the unfair wrath of social media? Consider what the owners of KD’s restaurant face now that Oklahoma City Thunder star and four-time NBA scoring champ Kevin Durant has joined forces with the arch rival Golden State Warriors. The prized Durant connection grew toxic in an instant.

Fan reaction was so intense the restaurant closed its Twitter account due to excessive vitriol. KD’s Facebook page went into limbo and has stayed there. Yelp invoked its “Active Cleanup Alert” protocol, placing a banner that reads “This business is being monitored by Yelp’s Support team for content related to media reports” atop KD’s Yelp page. The restaurant’s basic details remain, but old reviews are grayed out and new ones are blocked. A handful of still-posted YouTube videos—a young boy breaks into tears upon learning of Durant’s departure, clips of Durant’s jersey being burned—indicate how upset the fan base actually became.

What now for the restaurant that carries the KD brand? If the anti-Durant backlash continues, the parent company should be able to absorb the blow. Its operator, Norman, OK-based Hal Smith Restaurant Group, opened the $5 million KD’s in 2013. Hal Smith controls more than 60 restaurants across 13 concepts in the region. Among them are restaurants associated with another celebrity, Toby Keith’s I Love This Bar and Grill, whose OKC unit is immediately adjacent to KD’s.

Fortunately for KD’s, the restaurant’s reputation, extensive “upscale Southern” menu and desirable location should help it ride out the storm. On TripAdvisor, KD’s is ranked No. 10 out of 1,385 Oklahoma City restaurants. The 10,000 sq. ft. operation seats 320 guests.

KD’s isn’t Durant’s only restaurant connection. He also appears in TV ads for Oklahoma City-based QSR chain Sonic, which has more than 3,500 restaurants. Sonic issued a statement when Durant left that sidestepped his defection.

"We are in the second year of a great partnership with Kevin Durant,” said Sonic president and chief marketing officer Todd Smith. “Over the past two years, we've had the opportunity to create fun, innovative content and products with his help that you could only find at Sonic, including his two Signature Slushes."

Durant is also part owner of another foodservice venture. In 2014, Orange Leaf Frozen Yogurt signed an equity deal in which Durant became a spokesperson/endorser for the brand in exchange for an equity interest. The Oklahoma City-based chain currently has 304 stores.

"We are, of course, disappointed that Kevin is leaving the Thunder," Orange Leaf president Geoff Goodman said. "However, our relationship with Kevin is based upon the quality person that he is, and we support him regardless of geography. We wish him continued success on and off the court and respect his decision."

And Durant? He’s got enough guaranteed money now that restaurant deal income may not matter all that much. Even before he signed his new two-year, $54 million deal with the Warriors, he was already the fifth-highest paid athlete in the world. Forbes estimates his annual endorsement income at $36 million per year. Durant’s Nike deal alone could bring him $300 million during its 10-year duration, according to Forbes.

Durant played for the Oklahoma City Thunder for nine years. The statement he released   when he left indicates he knew he was burning his bridges by joining the Warriors.

“It really pains me to know that I will disappoint so many people with this choice, but I believe I am doing what I feel is the right thing at this point in my life and my playing career,” he said.

“I will miss Oklahoma City, and the role I have had in building this remarkable team. I will forever cherish the relationships within the organization—the friends and teammates that I went to war with on the court for nine years, and all the fans and people of the community. They have always had my back unconditionally, and I cannot be more grateful for what they have meant to my family and to me.”

Well, that support is definitely conditional now. Even neutral observers like ex-NBA star Charles Barkley opine that "Kevin Durant is trying to cheat his way into a championship." Or as one since-deleted Yelp review put it when the news first broke, "When I first ate his food, it tasted amazing, food made with respect, honesty and trust. Now it just tastes like the food of a traitor.”