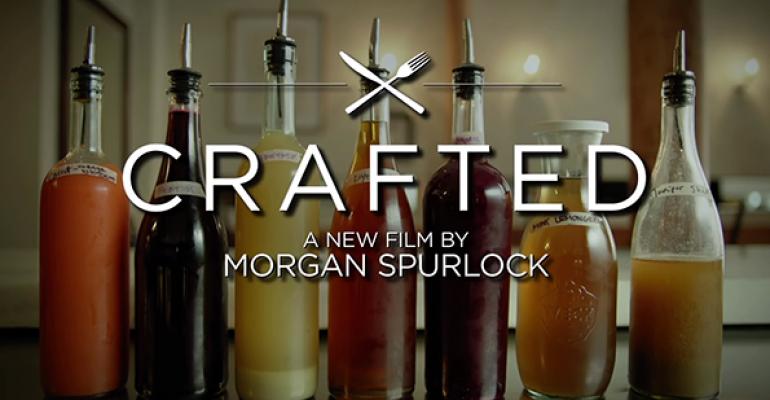 The phrases “handcrafted” and “artisan” appear often on restaurant menus, but it’s not always clear what they mean in practice.

A new documentary short directed by Morgan Spurlock (Super Size Me) called Crafted debuted in June exploring what it means to be an artisan in the modern age. Available for viewing online at Amazon Prime, “Crafted” spotlights Bar Tartine co-chefs Cortney Burns and Nick Balla as representatives of true craftsmen in the kitchen.

The two are known for their hard core use of Old World techniques to produce ingredients most chefs would rather buy. At Bar Tartine, for example, all cheeses, butter and sodas are made in house, as are a majority of the spices. The restaurant ferments and cures its own fish and meats. Animals are butchered in house, and even tea is made from dried herbs and spices, rather than purchased.

It’s a mission of the restaurant, owned by Elisabeth Prueitt and Chad Robertson, but it’s also how Balla and Burns choose to live, Burns explains.

“We strive to make things from scratch because we love to do it and we’re curious. And we just prefer to get our ingredients that way,” she adds. “It’s not really about the food so much as it’s a movement about being more conscious not only about what we put into our bodies, but how we purchase and how things are made.”

It applies to every aspect of their lives, from the ceramics used at the restaurant to the clothes on their backs, she says. “There’s a sewing machine downstairs, but I don’t have time for that one.”

Balla and Burns joined the Bar Tartine team in 2011 and in the film the two describe their cooking as “fusion” dishes that come from villages in third-world countries that were made by grandmothers. It’s food with “soul,” Burns explains.

“There’s a larger appreciation for things that are made by hand,” says Burns in the film. “When we make things by hand, we get to reach to the past.”

In the kitchen, we see the two breaking down a pig, tossing the whole head into brine without really knowing what they plan to do with it. We learn that Balla rarely measures. They often forget what ingredients they’ve ordered so delivery day is also a day of discovery, and the menu goes with the flow.

The restaurant has refrigerators filled with countless containers–carefully marked with dates–because the chefs like to see what happens in time as things age and ferment.

Balla in the film concedes that the two could be “making three times the salary we are now. But we’re happiest here. We’re happiest cooking.”

A second Bar Tartine is in the works, Burns says, though a location hasn’t been found yet. It will be in San Francisco, where the chefs can be present. “Our food is so hands on. It would be really hard if we couldn’t be there,” she adds.

Other artisans featured in the film include Luke Snyder and David Van Wyk of Bloodroot Blades in Arnoldsville, GA. They forge knives using from a variety of materials that may otherwise have been discarded.

The film also includes a look at Yuji Nagatani, a seventh-generation pottery producer who makes rice cookers in Iga, Japan.

Crafted was sponsored by ice cream maker Häagen-Dazs, in part to promote a new artisan line of flavors, such as banana rum jam and applewood smoked caramel almond. Ironically, Häagen-Dazs is owned by General Mills and is licensed in the U.S. and Canada to Nestle, a food conglomerate that could be seen as the antithesis of the type of artisans celebrated by the film.