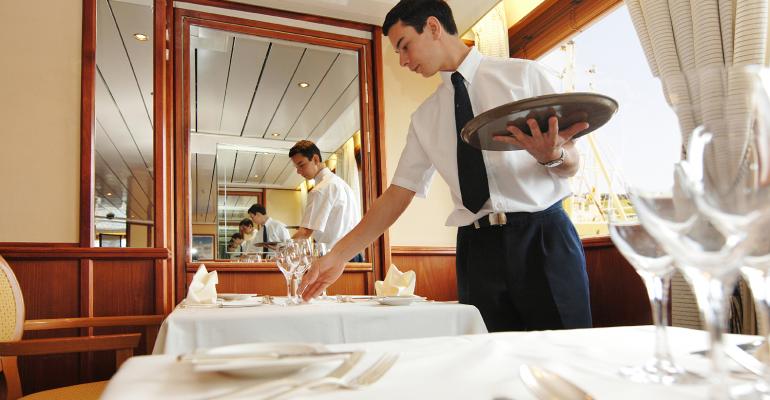 Thierry Dosogne / Stone / Getty Images
In the lawsuit filed in U.S. District Court for the Western District of Texas in Austin, the Restaurant Law Center and Texas Restaurant Association argue that the labor department has overstepped its authority and is “attempting to re-write the statute via regulation.”
Operations>Legal

Scheduled to go into effect Dec. 28, the amended regulations announced by the labor department in October attempt to limit when employers can use the sub-minimum wage, or tip credit, to the hours when workers are performing tip-producing tasks or tasks that directly support tip-producing work, like setting tables, making coffee or rolling silverware. Employers will only be able to use the tip credit if the worker spends less than 20% of hours worked during a workweek or less than 30 minutes continuously on tip-supporting work.

Related: The 80/20 tipped wages rule may be coming back: Here’s what that means for operators

In the lawsuit filed in U.S. District Court for the Western District of Texas in Austin, the Restaurant Law Center and Texas Restaurant Association argue that the labor department has overstepped its authority and is “attempting to re-write the statute via regulation.”

Emily Williams Knight, the Texas Restaurant Association’s president and CEO, said in a statement, “Tasks such as getting the restaurant ready for customers, restocking items during meal service, cleaning, and closing down the restaurant at the end of the day have long been an integral part of the tipped occupations commonly found in restaurants. Because restaurant employees often move rapidly from one task to another throughout a shift, there is no practical way for an employer to keep the task-by-task records the administration’s regulations would demand to avoid potential liability.

“Operators are exhausted after a very difficult 20 months of the pandemic,” she added. “Now is the wrong time to burden them with unnecessary regulations.”

In the complaint, the plaintiffs charge that the rule will “severely and irreparably harm thousands upon thousands of restaurants and their employees,” adding to the injury of the pandemic, which has forced an estimated 110,000 restaurants to close permanently.

The Obama-era guidance was designed to protect restaurant workers from being paid a sub-minimum wage — which in some states is as low as $2.13 per hour — for non-tip-producing work, if the worker performed non-tipped tasks more than 20% of their shift.

Under the Trump administration, the labor department moved to roll back the 80/20 rule, but it was brought back under the Biden administration.

The updated version that goes into effect later this month brings back those protections, with the clarification that the tip credit can be used when workers perform some non-tipped tasks that directly support tip-producing work, like filling salt and pepper shakers and ketchup bottles, setting and bussing tables or folding napkins.

Many tipped employees remained on the job through the pandemic performing non-tipped work, noted Jessica Looman, the labor department’s acting administrator for the Wage and Hour division, in October.

“Women, people of color and immigrants represent more than half of all tipped workers,” she said in announcing the final rule. “Today’s final rule enhances protections for this vital segment of the nation’s essential workforce and combats income disparity and promotes equity.”

In the lawsuit, the Restaurant Law Center argues that the Fair Labor Standards Act, or FLSA, allows employers to use the tip credit for any employee engaged in a tipped “occupation,” defined as regularly earning more than $30 per month in tips. The original 1967 regulation did not speak to job duties and the side work that comes with being a server has long been considered part of the job.

“But the department is now attempting to re-write the tip credit provision of the FLSA to dissect these occupations into different categories of job duties, and dictate the tip credit is available for certain of an occupation’s duties but not for others,” something Congress chose not to do, the complaint said.

Angelo Amador, executive director of the Restaurant Law Center, said the proposed regulation will create confusion and compliance challenges, which will drive up operating costs.

“The administration’s attempt to improperly use the regulatory process to legislate changes to the ‘tip credit’ would severely impact operators who are currently focused on labor and supply chain shortages and working to keep their doors open after an economically devastating pandemic,” he said in a statement.

It’s not the first time the Restaurant Law Center and Texas Restaurant Association have attempted to block restrictions on use of the tip credit.

The two organizations also sued in 2018 to block the labor department from enforcing the 80/20 rule.