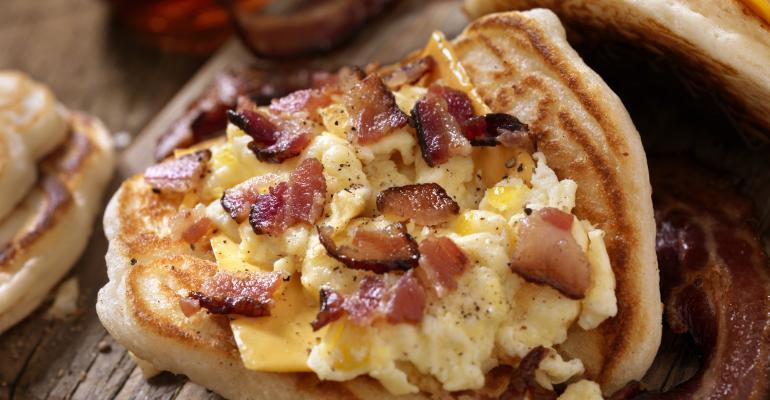 Sponsored by The French's Food Company

Breakfast is one of the few areas of opportunity still promising growth for those in the foodservice industry, and savvy operators are making the most of it.

Many restaurateurs—even those without a full breakfast program—are finding that well-crafted, all-day breakfast selections can help to generate sales, particularly those that are menuing highly portable breakfast sandwiches like McDonald's iconic Egg McMuffin. At the same time, operators are catering to consumers who are looking for a more adventurous early morning dining experience by incorporating such on-trend influences as global and ethnic fare, bolder flavors and nutritional concerns.

The only limitations are an operator's creativity, experts say.

“Lifestyles have changed throughout the years and the old breakfast, lunch, dinner mealtime occasions have become passé, especially with the millennials and younger generation,” says Arlene Spiegel of New York-based restaurant consultancy Arlene Spiegel & Associates. “Breakfast could be an energy bar eaten on the way to the bus stop with a bottle of juice or herbal tea. Dinner could be a feta and spinach omelet with a side of house-cured bacon. There are no rules.”

The breakfast marketplace itself is also changing, Spiegel says.

No longer are diners and coffee shops offering traditional early morning fare as the only option the public considers when dining out at breakfast. “Pizza topped with eggs, prosciutto, vegetables and cheese meets all the food group guidelines providing protein, carbs and fiber,” she says. “Tacos are always a good carrier for eggs, and when topped with cheese and sofrito are a delicious alternative to the boring diner breakfast. Even the old French toast and pancake standbys are consumed throughout the day with savory and sweet toppings. Chicken and waffles is considered one of the most popular dishes on menus today.”

Heightened consumer interest in being able to order all-day breakfast options is helping to drive this trend. In the National Restaurant Association's 2016 industry forecast, 70 percent of consumers polled said they wished restaurants served breakfast throughout the day.

Increasingly, restaurants are addressing the consumer’s desire for all-day breakfast items. Research firm Datassential identified a number of restaurants taking that route, including:

Chefs and operators also are intent on kicking up the flavor profiles of their breakfast fare, and suppliers are looking to accommodate them. For example The French's Food Company, maker of Frank’s RedHot® Original Cayenne Pepper Sauce (already a popular condiment for eggs), has expanded its line to include such products as Sweet Chili®, Sriracha Chili, Stingin’ Honey Garlic™ and Rajili® Sauce. Products such as these can inspire a whole new selection of bold breakfast items, including a Pulled Pork & Eggs Sriracha Hollandaise Sandwich and an Asian Chicken & Egg White Wrap. Operators can also broaden their breakfast, brunch and late-night breakfast flavor profiles with the help of the company’s online tool: http://www.inspiredflavor.com/breakfast/, which provides inspiration for spicing up breakfast menus.

This more recent attention to breakfast is helping to drive traffic and sales. According to Datassential’s 2016 Breakfast Keynote Report, 93 percent of operators report that breakfast sales have increased, or at least stayed the same, compared to the previous year. At the same time the trend is helping to fuel the growth of breakfast-only concepts.

David Birzon, chief executive of 17-unit breakfast-centric Snooze an A.M. Eatery, says, “Breakfast is our business, so it's extremely important. Snooze seeks to evolve the a.m. dining experience through culinary innovation, an eclectic and energetic atmosphere, and comfortable and friendly service.”

Birzon agrees that breakfast as an all-day meal phenomenon has emerged as a significant industry trend. “Since we opened in 2006 we have always held the belief that pancakes aren't just a breakfast food,” he says. “We create chef-inspired, seasonal menus and are constantly changing and studying trends to up our breakfast game. We create dishes with responsibly sourced food that is the major component of our Snooze-Approved program.”

To cater to today's more venturesome customers, he continues, operators must provide “something different, something exciting. We create fresh and creative twists on classic dishes—for example, our signature dish, the Pineapple Upside Down Pancake. The Pineapple Upside Down Pancake is a perfect example of a nostalgic item turned into a decadent breakfast item.” The dish is served with caramelized pineapple chunks, homemade vanilla creme and topped with whipped cinnamon butter.

Birzon also points to the Breakfast Pot Pie, Snooze's version of a pot pie or biscuits and gravy. “We start with a flakey puff pastry and top it with our homemade rosemary sausage gravy and a sunny side egg,” he says. “It's comfort food, breakfast-style.”

Breakfast and menuing all-day breakfast fare are central to business at the Rockville, Maryland-based Silver Diner. Concept co-founder and executive chef/vice president of culinary operations Ype Von Hengst notes that breakfast accounts for 25 to 30 percent of the chain's business. “Breakfast is part of the concept's DNA,” he says. “It gives us a huge advantage over other concepts. Breakfast is not only key to the Silver Diner, it is key to what is happening in the industry.”

“We're seeing a lot more ethnic influence,” Von Hengst says. “The staple of eggs and omelets is always No. 1, but now you have to get innovative. For example, the menu includes a goat cheese omelet with tomatoes, basil and balsamic vinegar.

Silver Diner also features another variation on a theme with its Boneless Fried Chicken & Waffles. The dish includes boneless breaded chicken and a pecan waffle with cherry pepper honey, sausage gravy and syrup.

Breakfast has become a meal period where not everyone wants ham and eggs, Von Hengst observes. “Customers are demanding more daring items. They want more choices.”

Spiegel agrees. “Consumers are looking for that special spot that combines the familiar with the adventurous,” she says.” Oatmeal topped with raisins and cinnamon is fine, but when you top it with savory caponata, or Korean kimchi, it takes on a whole new meaning.”