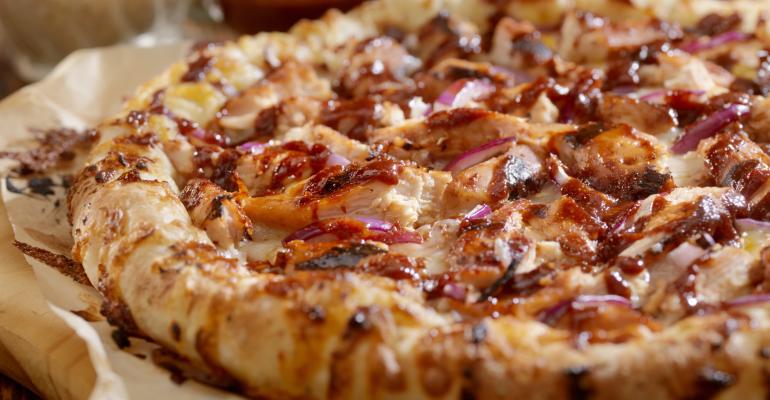 Sponsored by The French's Food Company

As Americans grow more adventurous in their dining out behavior, restaurateurs are catering to this evolving trend by taking the universally popular pizza to its next flavor level.

While tried and true favorites such as pepperoni, sausage and mozzarella remain the toppings of choice for many consumers, operators are broadening their pizza appeal by offering the likes of smoked duck, pineapple, balsamic glaze, sriracha hot sauce, barbecued chicken and even hot dogs.

Overall, pizza consumption in the U.S. is trending upward, according to Technomic's 2016 Pizza Consumer Trend Report. Americans now average 4.0 pizza occasions per month, up from 3.4 in 2014—and the availability of innovative toppings is increasingly key to their ordering decision. The study finds that 39 percent of consumers—up from 32 percent two years ago—say that new and innovative toppings are highly important in creating a good pizza.

Technomic also reports the influential millennial group recently said their reason for ordering pizza was because they wanted to try new LTO offerings—up 5 percent from 2014.

“Pizza has gone far beyond its Italian roots,” says Datassential in its International Concepts study, “Pizza Around the World.” “Today you can find it at a wide variety of operations across every segment.” For example, the research firm says that 28 percent of U.S. fine dining restaurants offer pizza.

Consumers, in fact, are finding themselves able to choose from a wide variety of cuisines and flavors when it comes to ordering pizza—“Mexican taco pizzas, Thai pizzas, Greek pizzas,” Datassential points out. “That variety, and pizza’s inherent adaptability, means there are always opportunities for experimentation, whether it’s an over-the-top pizza creation designed to grab attention or a variation on a classic that swaps out the sauce or meat with a global ingredient.”

Leading pizza purveyors have jumped on the bold flavor bandwagon too. For instance, Pizza Hut made news in 2015 when it debuted its "Hot Dog Bites" pizza, a cheese pizza with mini hot dogs baked into the crust. More recently, Little Caesars launched its Smokehouse pizza with beef brisket, pulled pork, applewood-smoked bacon and barbecue sauce.

At the same time, major brands like Papa John's, Domino's and Pizza Hut have upped the flavor ante by introducing pies powered with sriracha and other hot sauces.

“Pizza is being turned upside down in terms of what operators are doing these days,” says Trip Kadey, Director of Culinary for The French's Food Company, maker of pizza-friendly ingredients such as Frank’s RedHot® Original Cayenne Pepper Sauce, and Sriracha Chili Sauce. “People are into more experimentation. There's a whole new definition of food in America today.”

American consumers and operators are not alone in their quest to identify the latest cutting edge pizza toppings. Pizza has emerged as a global phenomenon and international operators are exploring a new wave of flavor combinations. Datassential's “Pizza Around the World” study cites several such “out of the box” examples:

In the meantime U.S. operators are catering to domestic pizza fans who are hungry for the next big iteration of the popular pie. The 60-unit Anthony's Coal Fired Pizza chain begins by distinguishing itself from the pack by baking all pizzas in its signature coal-fired ovens, which gives its pies a distinctive smoky taste.

While owner Anthony Bruno says customers of the 15-year-old concept can customize their own pizza by choosing from a variety of ingredients, the expanding brand also menus several specialty pies. One of the operation's top sellers is its Roasted Cauliflower Pizza, made with oven roasted cauliflower, olive oil, garlic, Romano and mozzarella cheeses, topped with bread crumbs. Bruno says the pie is based on his grandmother's recipe. “Even the people who hate cauliflower love it,” he says.

Another of Anthony's pies which caters to adventurous tastes is the Paul & Young Ron Pizza, which is topped with small oven roasted meatballs, sausage, hot or sweet peppers and dollops of ricotta and Pecorino Romano cheeses. The chain also features a Philly Cheesesteak Pizza, with thinly sliced marinated top round and caramelized onions, and is testing an Italian BLT pizza, which includes mozzarella, fresh tomatoes, bacon and arugula.

To be sure, Americans have not yet tired of traditional pies like the Neapolitan classic, Margherita, with red sauce, basil and mozzarella. But they are certainly opening up to new experiences. “We find that our first time guests play it safe,” says Jenelle Brown, vice president of operations and training for Uncle Maddio's Pizza, a fast casual pizza specialist based in Atlanta. “But as they become loyal guests, they trust the brand and what we have created for them. Then we see their tendencies shift. We are also seeing an increase of 'foodie' pizza eaters.”

Clearly, as today's consumers reach for bolder new combinations and taste experiences, restaurateurs are throwing open the floodgates of creativity when it comes to menuing pizza. “People love pizza,” says Brown, “and they are learning that they can get outside the box of a traditional pizza experience and enjoy a food they love with different flavor profiles.”