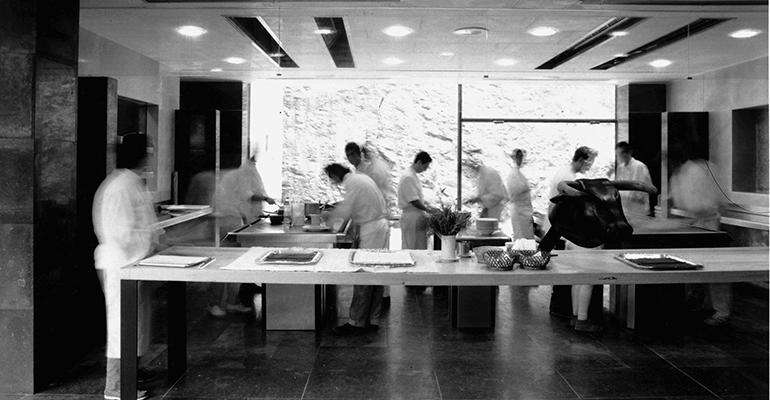 <p>El Bulli, 2003. The world&#39;s greatest restaurant employed only six full-time kitchen workers. Unpaid stagiaires made up the majority of the kitchen staff.</p>
Operations>Staffing

Around the world, top restaurants host “stagiaires” in their kitchens for a brief period (usually several months). The stage is a period of training—an opportunity for motivated cooks with a thirst for knowledge to learn from renowned culinary masters, and for leading kitchens to receive an infusion of culinary talent and cutting-edge ideas. Stages are almost always unpaid.

Some restaurants host only a few stagiaires at a time, while at others, stagiaires make up the majority of the kitchen staff.  For example, El Bulli, once renowned by many as the world’s—and certainly Spain’s—greatest restaurant, employed only six full-time kitchen workers.  All other kitchen positions were held by stagiaires who included some of the top chefs in the world. They  were willing to volunteer their time to get a first-hand look at El Bulli’s one-of-a-kind operation.

From a knowledge transfer standpoint, stages provide a significant benefit both to the host restaurant and the stagiaire. But from a labor and immigration law perspective, foreign stagiaires can present a thorny dilemma.

“The stage as an unpaid working arrangement poses a potential issue for the employer under applicable wage and hour laws,” warns employment attorney Julie Reddig, based in Bethesda, MD. “The analysis of whether a stagiaire should be paid the applicable minimum wage would likely be examined the same way that an unpaid internship or training are examined, namely if the trainee works for his or her own benefit to learn a profession or vocation, the trainee does not displace paid employees, and the company does not derive the primary benefit of the work performed, then the work performed by the trainee need not be compensated,” Reddig explains. “However, if any of these three factors is missing, then the trainee would likely be classified as an employee and owed the applicable minimum wage for all hours worked.”

The arrangement is problematic under the immigration laws as well.

In the U.S., most stagiaires come as business visitors, either under the visa waiver (sometimes referred to as “ESTA” for the electronic system that authorizes travel in this category) or on a B1 visa.

Is it really okay to do a stage while here as a business visitor (visa waiver/B1)? The short answer is: maybe.

Business visitors may attend job interviews, but the type of job interview contemplated by U.S. Immigration is generally one to which you wear a suit and lasts just a few hours; not one at which you pick up a knife and lasts several months.

Importantly, business visitors may not work in the U.S.—“work” being defined loosely as “a job you would normally pay a U.S. worker to do.” Business visitors may attend meetings and conferences. Volunteer activities are allowed, but only if the activities are those that would traditionally be done by volunteers (theatre usher, candy striper), and that do not principally benefit the U.S. company. Training is allowed under certain circumstances. Training by observation is fine, but hands-on training generally is not okay.

What about a “back pocket” letter from the stagiaire’s U.S. host restaurant that clearly lays out the duration and nature of the intended training, and the fact that it is unpaid?

Christopher Hess, former Area Port Director for U.S. Customs and Border Protection (CBP) at Washington's Dulles International Airport and now a consultant focusing on CBP issues, weighs in on whether or not he thought a CBP officer would admit someone into the U.S. as a business visitor if he/she presented such a letter.

His answer: Probably not, as it appears that this activity would constitute "work" under the immigration laws. However, he agreed that stagiaires fall into a gray area.

Other visa categories such as J1 or H3 allow training to be paid and, under certain circumstances, hands-on, but these visas can be cumbersome, time consuming and too costly to obtain for a brief unpaid stage.

Given these potential traps for the unwary, what is an aspiring stagiaire to do?

• Wherever feasible, apply for a visa such as J1 or H3 to cover the stage.

• If you are traveling as a business visitor, limit your stage both in duration and scope (i.e. the nature of the proposed training activities).

• Be prepared to highlight how the stage will benefit you (the stagiaire) and your career opportunities in the home country.

• Do not accept any compensation for a stage, as this will clearly push it from the grey area into the realm of unauthorized employment.

For now, stages are an enduring part of the culinary landscape; therefore it is critical that both stagiaires and host restaurants understand their legal implications and proceed with caution.

Becki Young is cofounder of Hammond Young Immigration Law and head of the firm's hospitality practice and facilitates the sponsorship of foreign professionals, trainees, interns and individuals of "extraordinary ability" in finding employment in the hospitality industry in the U.S.