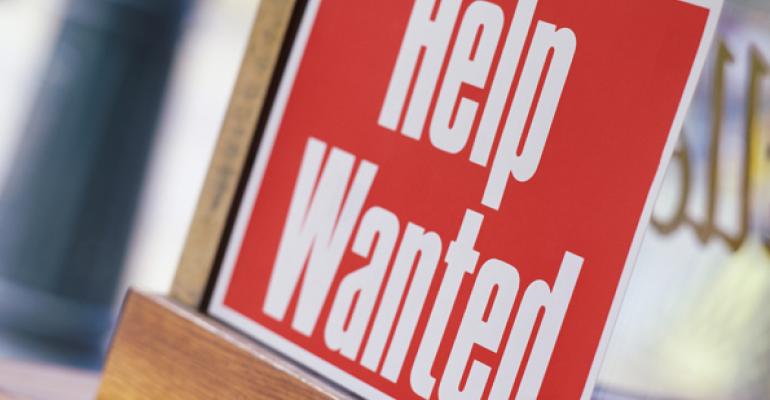 Maybe your restaurant can’t match the wages and benefits Chipotle Mexican Grill will tout to prospective employees during its upcoming one-day hiring spree. But at least be aware that the competition for top-notch restaurant talent is about to get brutal. “It is a candidate-driven market,” says Robert Krzak, president of restaurant industry recruiting firm Gecko Hospitality. “Candidates can choose from ... an abundance of different opportunities right now.”

Chipotle will hold a three-hour long cattle call (8 a.m. to 11 a.m.) on Sept. 9 at each of its 1,850 U.S. stores. The chain is looking for 4,000 entry level workers who will start at roughly $28,000 per year and enjoy significant benefits right off the bat, including healthcare, paid vacation, a 401(k) plan and tuition reimbursement.

More importantly, Chipotle offers applicants a realistic career path. New hires start out as crew members who cook food and roll burritos; top performers can become kitchen or service managers in a relatively short time. Those who do well at that level can quickly ascend to “restaurateur” status, supervising one or more units while being paid as much as $133,00 a year and driving a company car. Employees who stick around for 10 years get a two-month paid sabbatical—on top of their regular paid vacation.

Chipotle’s not blowing smoke. Its rapid expansion—it will open 200 stores this year, i.e., one very other day—creates an ongoing need for more managerial talent. This hiring event is designed to keep its pipeline full of high-caliber workers that can move up the ladder in a hurry.

“The economy has been thawing, more restaurants are opening, and there are fewer job applicants than there were several years ago,” co-c.e.o. Monty Moran told the Wall Street Journal.

Chipotle isn’t the only restaurant to attempt large-scale hiring outreach. In mid-August, franchise-owned Domino’s locations in Chicago sponsored a job fair of their own. Interested applicants went to one of the chain’s 106 Chicagoland stores between 11 a.m. and 4 p.m. to fill out an application and, for some, to get an immediate interview. Domino’s wanted to hire for positions ranging from general managers to pizza makers to delivery drivers. It, too, promised a career path that ultimately leads to advancement and enrichment.

"Our company provides a fantastic opportunity to those who show initiative and a desire to advance. Whether you're looking to grow with our company or need a part-time job, Domino's is the place to be," said Reece Arroyave in a release. He began his Domino’s career handling out coupon flyers as a teenager and now is a partner in a company that owns and operates 25 Domino’s stores.

The National Restaurant Association saw this labor squeeze coming when it made its 2014 predictions.

“As the nation’s economy strengthens and unemployment rates trend downward, restaurant operators are likely to see recruiting and retaining employees become difficult once again,” the NRA said in early 2014.

“A top-rated challenge in the pre-recession era, this labor issue was alleviated during the economic downturn. Restaurant employment growth is set to outpace overall employment growth for the fifteenth straight year in 2014, indicating that there will eventually be a gap between open positions and available candidates.”

That gap arrived on schedule, and it’s a big one right now.

“Staffing pressures across the industry are among the highest we’ve recorded since the inception of the People Report Workforce Index in 2006,” says Michael Harms, executive director of operations for Dallas-based TDn2K, parent of People Report.

This company is offering insights on dealing with the problem. People Report will present a one-hour educational webinar titled “Service Sector Workforce 2016: People Report Breaks Down the the Trends and Implications.” It’s set for for Sept. 10, 2015 at 1 p.m. Central time—just one day after the Chipotle hiring event.

The company positions its webinar this way:

“We have re-entered the white-hot labor markets of 2000 and 2006,” People Report notes, “Unemployment rates are dropping while hourly and management turnover have returned to pre-recession highs. The ascendance of millennial workers, mobile and social technology, along with growing wage pressures, requires uncovering the new best practices in training and development, compensation and both traditional and non-traditional benefits.”

Chipotle has figured out one way it can get ahead of these potential labor problems. This webinar might help your restaurant find another way to do the same for you.