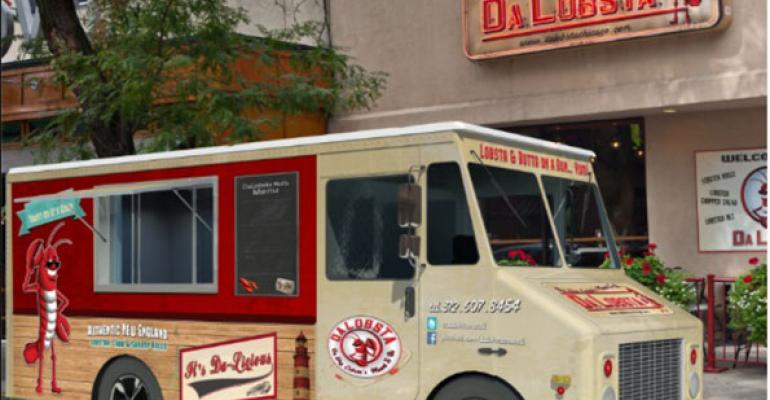 Opportunities continue to expand in the dynamic food truck segment, creating new ways for restaurant owners to make money from it without risking any capital. The latest ideas: purchase a truck with crowdsourced funds; hire a catering agent to market your truck for one-off events; or offer short-term rental of your truck when you don’t need it yourself.

Renting still remains the least costly way industry newcomers can break into the food truck game. But if you have an established restaurant concept, why not leverage your brand’s popularity and buy one using other people’s money instead?

That’s what Chicago fast casual restaurant Da Lobsta did. Its truck now cruises Windy City streets selling $12.95 lobster rolls out of a vehicle purchased with funds it raised from online investors. The restaurant had two units with combined sales of more than $1 million a year when it sought $70,000 to fund its food truck purchase.

"We were first to the market by offering an upscale lobster roll product at fast-casual prices, making it affordable for the masses," says owner/founder J Wolf. "We knew Chicagoans love their lobster and there was pent-up demand for lobster served at an affordable price. We have solved the riddle as to how to do it really well at a reasonably low price point."

Turns out there was also pent-up demand among small-scale investors ($1,000 minimum) who were familiar with Da Lobsta’s fare. The restaurant didn’t exactly crowdsource its venture, because only small segment of the crowd—accredited investors (net worth of $1 million, annual income of $200,000 or more)—could participate. But its online campaign conducted through small business funding site Bolstr quickly raised the $70,000 needed to purchase to the truck.

The restaurant didn’t give up any equity. Instead, investors were to be rewarded via a revenue sharing agreement. Da Lobsta pays out a percentage of gross revenue each month until investors are made whole. The payout is 1.25 times the initial investment. You can read more about the process here.

Da Lobsta is now tapping into one new revenue stream. It, or any other food truck owner, could gain another by accessing the catering market via Roaming Hunger. This site bills itself as “the hub for all things street food and catering.” It means to be a one-stop shop for food truck owners and customers. But its emphasis on catering may hold appeal for food truck owners, particularly those who own a bricks-and-mortar restaurant as well.

The idea is simple. Event planners go to Roaming Hunger to book trucks that will cater their next function. Roaming Hunger gives planners a list of available trucks, their menus and their rates; the planner picks their truck, often multiple trucks; and Roaming Hunger handles the details from there.

From an event planner’s perspective, it’s a turnkey solution that allows them to give event attendees a choice of hip foods—no matter the venue. From the truck operator’s point of view, Roaming Hunger is an agent selling their service to a market they’d otherwise struggle to reach.

One downside of truck ownership by a bricks-and-mortar restaurant is that the truck may provide significant revenue during just a few portions of the year. If that’s the case, why not rent out that truck to another operator during the slow times? It’s now possible to list a vehicle on www.foodtruckrental.com for free.

What sort of rental fees might you earn if you go this route? “Truck rentals range from $100/day to $3000/day and up (generally depending on the truck and length of the rental). You set the price and the terms, there is no obligation,” the site declares.

The food truck phenomenon is only going to get bigger. Current restaurant operators don’t necessarily need to have a truck, but there could be extra revenue and plenty of marketing exposure for those who give food truck ownership a try.