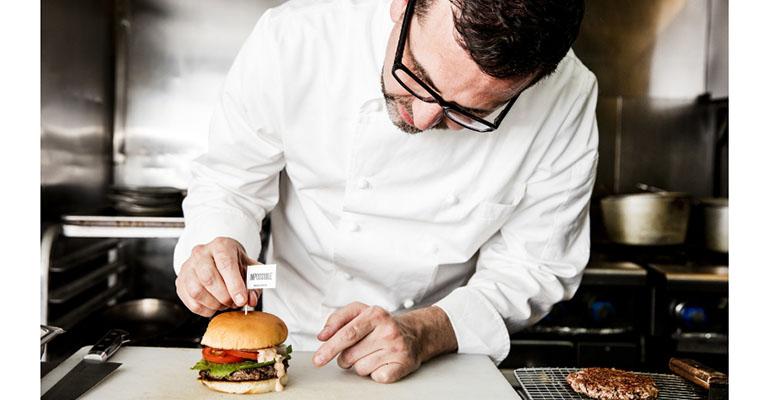 Earlier this year, New York chef and restaurateur David Chang blew minds with the introduction of a “bleeding” veggie burger developed by a Silicon Valley upstart with ambitions to feed the world.

At that point the “Impossible Burger,” as the product is dubbed, was only available at Chang’s New York restaurant Momofuku Nishi. But the burger is now appearing on the West Coast, where it has debuted on the menu of three high-profile restaurants.

Starting Oct. 13, Jardinière and Cockscomb, both in San Francisco, will offer the Impossible Burger, along with Crossroads Kitchen in Los Angeles.

The company behind the burger is Impossible Foods, based in Redwood City, Calif., and founded by medical doctor and scientist Patrick Brown.

Brown contends producing enough meat to feed Earth’s inhabitants is putting a strain on the planet’s precious resources. Yet humans remain largely unwilling to give up meat.

So Brown set out to develop a product that tastes, smells and sizzles exactly like meat, though it is made entirely from plants, including wheat and potato proteins, coconut oil and other ingredients — including one specific molecule called “heme” that occurs naturally in all plants and animals, and gives meat its red color and meaty flavor.

Jardinière Traci Des Jardins says her restaurant will serve the Impossible Burger with caramelized onion, avocado, special sauce and a side of pomme frites, for $16 in the bar and lounge.

“The Impossible Burger is a delicious and provocative way to begin an important dialog about food: how it tastes, where it comes from and where we go from here,” she says.

At the vegan restaurant Crossroads, chef Tal Ronnen is going for a more classic presentation with lettuce, tomato, pickles and house sauce, with truffle fries on the side, for $14.

“Everybody wants to do the right thing when it comes to the environment — but if it doesn’t taste good, you’re not fooling anyone,” Ronnen says. “That’s what makes Impossible Foods such a game-changer for conscious eating.”

At Cockscomb, which is known for its whole-animal philosophy, the Impossible Burger will come with caramelized onions, lettuce, gruyere, pickles, Dijon and mixed greens. The burger is priced at $19.

Brown, meanwhile, contends that his company will help create a sustainable food system that could feed 9 billion people by 2050. A full range of Impossible products is coming, including pork, chicken, fish and dairy.