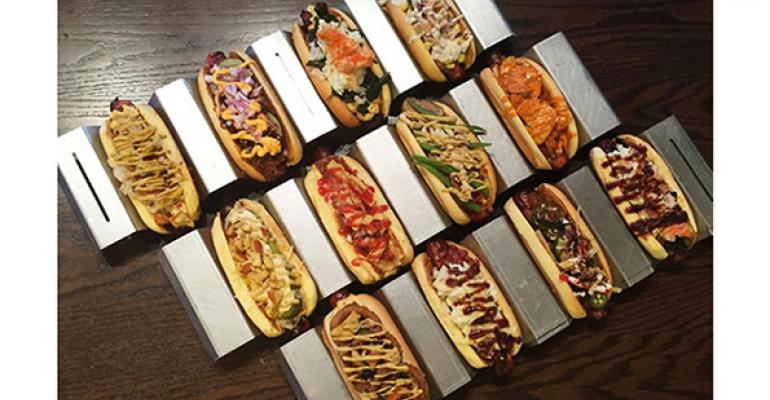 Don’t be fooled. A closer look at which toppings customers specify when they purchase hot dogs indicates that most stick with old standbys, even when more exotic options can readily be had.

Small but mighty Charlotte, NC-based hot dog concept JJ’s Red Hots operates just two stores plus a roving cart for catering gigs. But it knows how to aggregate and analyze sales data the same way big chains do. Just in time for the Fourth of the July—a holiday when Americans will down more than 150 million hot dogs—the minichain has released its Top 10 Hot Dog Toppings list, based on its last three years of sales data. If you’re looking to spice up your restaurants’ hot dog offerings, it’s worth a look.

“People are getting more experimental with their toppings,” says JJ’s founder and owner Jonathon Luther. “It seems the dreaded ‘foodie’ movement is creeping into the mainstream,” he adds.

That may be a tongue-in-cheek statement, because JJ’s prides itself on “hand-crafted” char-grilled hot dogs and features house-made, scratch-prepared sides and toppings, with the whole works served on foodie favorite Martin’s Potato Roll buns. The chain goes to the trouble of sourcing its hot dogs from 143-year-old Sahlen’s Meat Packing Co. in Buffalo. If you’re a foodie in Charlotte who’s hungry for a hot dog, JJ’s Red Hots is where you’re going to go.

Here’s the toppings list, in order of customer preference.

If founder/owner Jonathon Luther’s name sounds familiar, it’s because it’s very close to that of a prominent restaurant world figure. Jonathon is the son of Jon Luther, co-founder of JJ’s Red Hots in addition to being chairman of Dunkin’ Brands, where he was the long-time c.e.o. He was also president of Popeyes Chicken & Biscuits and held several other foodservice industry leadership positions. Jon Luther’s official title at JJ’s: strategic adviser.

For its part, the JJ’s Red Hots special for the July 4th week is the Franky Doodle Dandy, whose toppings include borracho beans, house slaw, BBQ sauce and cheese doodlez. The chain has an extensive menu of creatively topped hot dogs. . Just remember that despite all the creative options available on this menu, customers don’t stray too far from the basics.