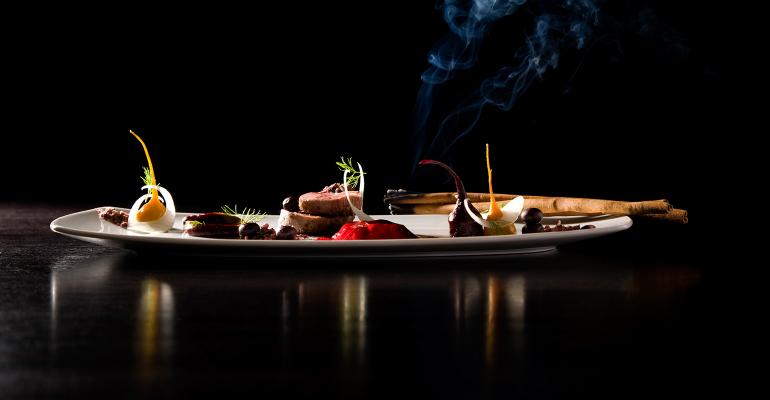 The Smell of Success

Chicago chef and restaurateur Grant Achatz at Alinea is famous for dazzling guests with taste and visual presentation. But the dining experience at all of Achatz’s restaurants is also often about aroma.

Achatz is known for his off-the-plate experiments with scent, including famously serving entrees atop pillows filled with nutmeg air that were pierced upon serving to release a sweet and nutty aroma.

In other dishes, bites of bison tenderloin were served on a hot river rock placed onto a nest of fresh juniper boughs, which infused the dish with the scent of toasted juniper. Achatz has also used burning cinnamon sticks and branches of fragrant fresh rosemary to enhance the sensual experience. “Aroma is ubiquitously regarded at all of our restaurants, enough to be regarded a first-class ingredient most of the time. We rarely construct a dish without considering how aroma plays a role,” said Allen Hemberger, director of media and publishing for The Alinea Group.

It’s an idea that’s catching on.

The way a restaurant looks is one thing. The way it smells is another. And restaurant operators — along with a growing number of ambient scenting technology companies — contend the power of aroma can set the stage for a memorable meal.

A few years ago, when Scott Popovic, then corporate executive chef of Certified Angus Beef, wanted to create a particular mood at a James Beard House dinner, he placed burning bourbon-soaked cinnamon sticks on each table.

“You really need to create a special, unique experience for the guest,” said Popovic. “I didn’t want them to think of being at the James Beard House or that there were 10 chefs in the kitchen. I was trying to transport them to a different mind frame.”

Most recently at Vita Urbana in Cleveland, Ohio, where he is now chef and partner, Popovic burned bay leaves, purported to have stress relieving properties, at a private dinner for a group of bankers. Last fall the Vita Urbana menu featured a bowl of smoked tomato risotto and blackened sea scallops. On the side was a bowl of cilantro onto which servers poured hot water to release the aroma of the herb. Alinea chef Grant Achatz has served entrees on pillows that, when pierced, released the aroma of nutmeg.

“I didn’t want to put cilantro into the dish,” said Popovic. “I’m just playing with food.”

Of course, the lure-in aspect of controlled aromas is nothing new.

Chains such as Cinnabon, Auntie Anne’s Pretzels and Subway are known for paying attention to ambient scenting, doing everything from cooking trays cinnamon and sugar and placing ovens at the front of locations, to baking at key times of the day with the goal of leading customers inside by their noses.

But scent marketing, or the practice of engaging customers through their sense of smell, has largely been a tactic used primarily by hotels, resorts and retail establishments. However, lately it is being used more in restaurants, in large part because a host of ambient scenting companies are increasingly targeting the restaurant industry.

Rather than burning or smoking natural herbs, spices or other ingredients, these companies typically provide customized fragrances made of a mix of natural and synthetic aromas that are dispersed through diffusion systems in individual areas or through HVAC systems.

Milwaukee-based Prolitec is among those companies that started with hotels and is now offering its services to restaurants.

“Moving into the restaurant space has been a natural transition,” said Roger Bensinger, executive vice president of business development for Politec. “[With restaurants,] first came the music, then design and now we’re addressing a very powerful sense of smell.”

About 18 months ago, Ernie Carnall, General Manager of Shuckums, had a Prolitec diffuser installed in a portion of the restaurant’s dining room. Initially, he said the goal was to neutralize an area where staff shucks oysters, filling large trashcans with empty shells throughout the night and giving off a sometimes-overpowering ocean aroma. With the help of Prolitec, Carnall said he chose scents that have a familiar food smell, such as lemons or pears. He plans to change the scent seasonally, for example moving to pumpkin in the fall.

“It does a great job of neutralizing the odor,” said Carnall.

While ambient scenting can be used in any area, Bensinger said the fastest growing sector in restaurants is hallways and bathrooms.

“The experience a patron has in the restroom reflects the overall experience the customer has,” he said. “More and more restaurants are realizing how important it is to have clean, good-smelling restrooms.”

Over the years, Dean Small, partner with Synergy Restaurant Group, said his firm has recommended ambient scenting to restaurant clients.

“Aroma is really very, very important in any dining environment and there are just multiple ways of doing it,” said Small. “It depends on the type of concept and where you’re going to have the aroma. There are ways to do it with design.”

For example, Small recalls a client that was developing a new prototype and wanted to vent aromas into the dining room, which was far from the kitchen, to infuse it with “real flavors” of cooking.

However operators choose to address the notion of scent, Small offers this advice: “I would try to be as natural as possible,” he said. “If it’s artificial and smells artificial I think you’ll do more harm than good.”