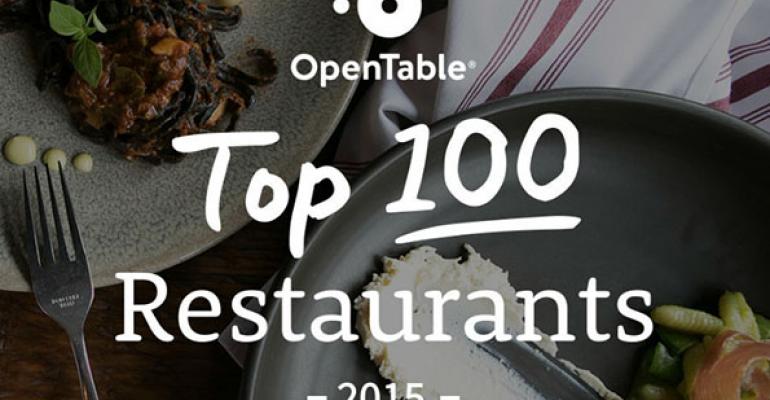 Reservation site OpenTable crunched the numbers based on the five million user reviews posted to the site in 2015 to come up with its annual 100 Best Restaurants in America list.

All restaurants that take OpenTable reservations (and received a minimum number of qualifying reviews) were included for consideration, according to OpenTable. The scores were calculated from each restaurant’s average “overall” rating, its rating relative to others in the same metropolitan area, and the average number of restaurants reviewed by diners who reviewed that restaurant.

While the list is diverse in some ways, from long-established restaurants to relative newcomers, and representing all kinds of American and ethnic cuisines, all of the top 100 “place a premium on striving for perfection… Each honoree provides fare and hospitality that consistently earn rave reviews and attract repeat diners,” states OpenTable.

• The vast majority of the Top 100 fell into the upscale/fine dining category.

• Most of the restaurants feature American and French menus.

• Nearly half of the winning restaurants offered multicourse prix fixe meals and chefs’ tastings. Atera, in New York, doesn’t even print menus. This trend “reflect[s] diners’ desire for a more chef-curated experience,” according to OpenTable.

• About a quarter of the top 100 opened within the last five years.

• 14 of the restaurants have been around for 30-plus years, including perennial Manhattan favorite La Grenouille, which dates back to 1962.

• Rare and luxury ingredients were all over the top menus: foie gras (the California ban on which was repealed this year), burrata, game meats and octopus.

• The farm-to-table idea is “so ubiquitous now that restaurants don’t need to tout it,” says OpenTable. Top restaurants are taking the trend to the next level, starting their own gardens or partnering with nearby farms to produce ingredients for the kitchen.

The top 10 restaurants, in rank order, are:

Here’s the complete list of OpenTable Top 100 Restaurants of 2015.â