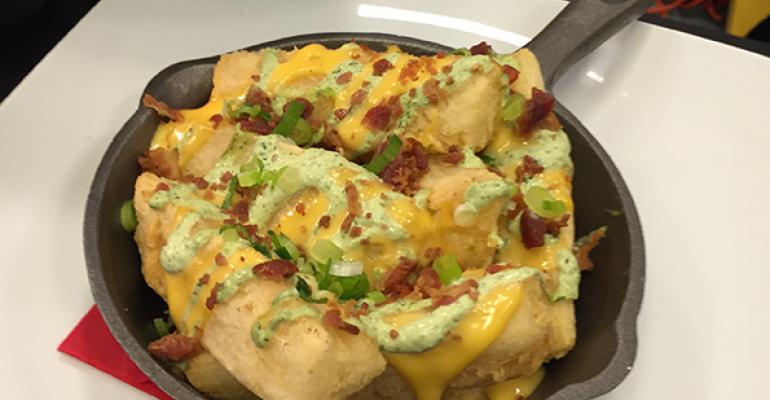 Restaurant operators remain interested in leading their customers in new culinary directions, but that drive has been temporarily eclipsed by moves to clean up their supply chain, menu trend expert Nancy Kruse told attendees at this week's MUFSO conference in Dallas.

That was reflected on the floor of the Supplier Exchange, where exhibitors displayed an array of items with “clean” labels, free of preservatives and other ingredients that have become unpopular with customers, such as high-fructose corn syrup, genetically modified organisms and gluten.

Citing large chains such as Panera Bread and Papa John’s Pizza, both of which have pledged to do away with a wide variety of additives, Kruse said, “the velocity at which this demand moved from what was really a fringe expectation into the mainstream has been quite extraordinary.”

“Major chains are falling over themselves to get on board with this trend,” she said during her "State of the Plate" presentation.

Suppliers have responded with items such as Sweet Street’s Manifesto Cookies, made with 100 percent cane sugar and free of GMOs, additives, artificial flavors and artificial colors; and Gielow Pickles’ all-natural pickled jalapeño and banana peppers.

Kruse said such “free-from” claims are often conflated in the eyes of Millennials with animal welfare, another priority for a growing number of consumers. In another trend presentation, Chris Startt, director of foodservice insights for The Coca-Cola Company, said that many consumers’ perception of what is healthy is evolving, with “simpler” foods, such as those without additives or with a shorter list of ingredients, being perceived as being better for them.

He also said that a third of meat eaters are looking for opportunities to reduce meat consumption, which is why we’re seeing the emergence of more plant-based proteins.

Kruse said we should expect that to continue, noting that, although around 5 percent of Americans are vegetarian, that number skyrockets at some universities to over 20 percent, although she has noted in previous years that college students often give up their meatless ways after graduation.

During the Supplier Exchange, The Jackfruit Company offered samples of the tropical fruit, which is growing in popularity as a meat substitute.

Although clean labels have been the focus of many chain restaurant operators, foods from different cultures have also been on the rise. Velvet Taco, another Hot Concepts winner, served an Indian chicken tikka taco, and at the Supplier Exchange Deen Meat and Cooked Foods served shredded brisket in Cuban Ropa Vieja style.

Kruse, in fact, predicted a new wave of Cuban foods, buoyed by the popularity of the mojito as well as the ongoing political rapprochement. Noting that culinary trends often reflect what’s happening geopolitically, she said she expected Middle Eastern cuisine to become more popular as the news cycle continues to focus on the region. She also said to expect deeper exploration into already popular Korean cuisine.

Roy Choi, a Korean American and founder of the Kogi BBQ Taco Truck in Los Angeles, was a keynote speaker at MUFSO. He explained that Korean chefs had emerged as a culinary force in the past decade in the U.S. thanks to widespread immigration from Korea in the 1970s. Now that the first generation of American-born Korean-Americans have come of age, they have found their culinary voice and understand how to present their cuisine to other Americans.

Choi, who lives in Los Angeles, where many culinary trends start, said he has noticed an upsurge in the popularity of Filipino food.

Carlito Jocson, executive chef of Yard House, who is himself a Filipino American, said he also sees growing interest in the cuisine.

Jocson spoke on a panel moderated by Kruse on culinary mashups, in which he discussed his poke nachos and vampire tacos. The latter is a late-night dish from the Mexican state of Guanajuato in which corn tortillas are coated in melted cheese and then filled with assorted items; at Yard House those items are carnitas, bacon chorizo, roasted garlic, cilantro, Cuban crema and chipotle sauce.

Also on the panel was Jen Gulvik, creative director and senior vice president of marketing at Houlihan’s Restaurants. She discussed the success of the chain’s “spiralized” noodles, for which vegetables, often squash, are shredded to resemble noodles and used as pasta replacements.

Kruse noted that spiralizing is so popular that there are now 142 cookbooks devoted to the topic.

Culinary mashups were on display at the Supplier Exchange with items such as MIC Food loaded yucca fries and kimchi street tots from McCain Foodservice.

The Monday night awards reception and awards presentation are sponsored by: Avocados from Mexico