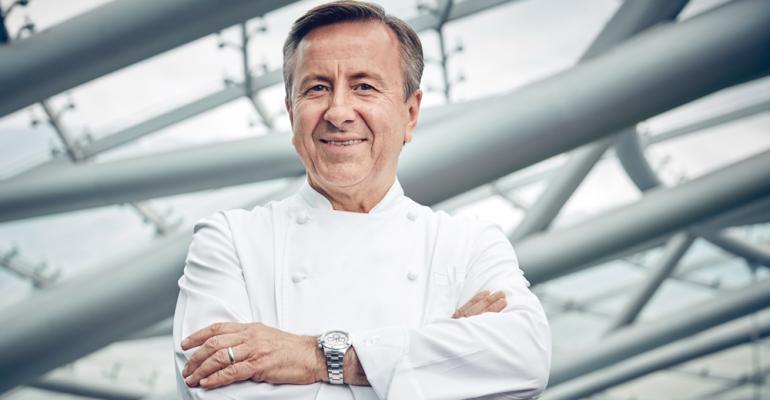 While Daniel Boulud is originally from Lyon, France, he’s been a driving force in making American fine dining what it is today and molding the next generation of chefs.

Diners were demanding more, and American fine dining delivered. “I feel I was part of it during that journey,” Boulud said.

Raising the profile of American dining and chefs has become a passion for Boulud over the past decade. But before he helped raise up the next generation of chefs, he built an empire himself in his adopted country.

Boulud first gained acclaim as executive chef of Le Cirque before opening his own flagship, restaurant Daniel, in 1993.  He is now the chef and owner of 14 restaurants around the world — ranging from Michelin-starred fine-dining restaurants, to elegant taverns and sausage-and-burger eateries — and is the author of nine cookbooks. A chef looking to enter into the fine-dining world could do no better than to start with his book, Letters to a Young Chef, a memoir filled with practical advice.

He also works more intimately with young chefs as the chairman of Ment’or, which recruits and trains competitors for Team USA in the biennial Bocuse d’Or culinary competition and offers grants to young chefs who want to train at fine-dining restaurants.

We spoke to Boulud about the changes he’s seen along his journey and where he thinks dining is going next.

How has technology changed dining out?

You can do your reservations on the phone now, and you don't talk to someone, but once you get to the restaurant, you really want service. You really want attention. And before we had maybe less information about the customer or less recollection about everything, but we were making a lot of effort to earn a customer and keep him loyal. And I think today it's still a very important thing to do.

You have restaurants all over the world. How do you ensure your exacting standards are met from afar?

Most of my chefs, they wouldn't be the chef if they couldn't manage the restaurants. We make our chefs very responsible, they are on a program where they are fully responsible for the payroll, the food costs, the management of the restaurant, that's the manager and chefs [role].

Can you tell me about your work championing America’s young chefs through Ment’or?

This is about supporting the next generation.

We have done a lot of competitions for young chefs. And [through a grant] we give the opportunity to a young chef to be able to go from one restaurant to another. Basically, it's the school of the finest. Once we have chosen the group of grantees, they can take a three-month sabbatical from where they work and choose any restaurant in the world they want to work in for three months. This is fantastic because it's very enriching to do stages [unpaid apprenticeships], but you have to quit your job; you have to go broke, and it's very difficult.  We support their trip; we support their lodging; we support their stipend and anything they need for that stage to succeed.

Tell me about one of your latest project, Spyce?

Three years ago, they approached me. They were all MIT students, so they all knew the challenges of finding good, healthy, warm and nurturing meals at a good price. So, their graduation project was to build a robotic kitchen. Here the machine does the measuring and brings consistency of speed to service of fast casual. And it's fabulous; it's quite interesting. It's still a prototype, there's only one store (opening in May), it's the beginning, but I think it has great potential in the future. It’s not about replacing people with this concept, it's all about bringing service at the right price and quality. To me, it is the future of what fast casual will not become but be part of.

Our interview with Daniel Boulud has been edited for brevity and clarity.