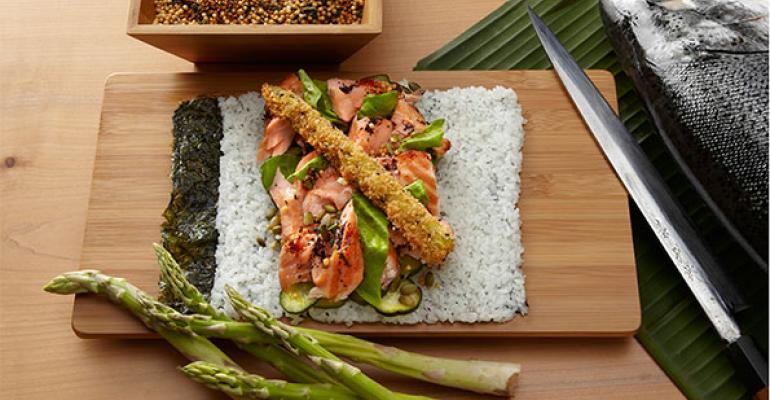 Back in December, we stared deep into our crystal Cronut and predicted mashups—taking two separate menu items and combining them, or two different cuisines and fusing them—would remain a popular trend throughout 2015.

“Now it seems like you can pull any two awesome bakery items out of a hat and mash them together to sell out of a truck in Brooklyn,” we wrote as part of our “15 food trends that are cooking in 2015” piece. “We’ve seen the Wookie (waffle and cookie), Scuffin (scone and muffin), the Creffel (French crepe and Belgian waffle), the Bruffin (brioche/muffin) and the Cragel (croissant and bagel).”

While the popular New York pastry may have seen its 15 minutes, there have been plenty of mashups to take its place. It’s safe to say mashups haven’t gone away and are getting more outrageous day by day.

But the most interesting mashup to catch our eye thus far in 2015 is the sushi burrito. Two fast-casual concepts—Sushirrito in the San Francisco area and Komotodo Sushi Burrito in Denver—are experimenting with the odd combination of bite-sized Japanese seafood and overstuffed Mexican tortillas.

“The sushi burrito craze that started in the past few months is now REALLY taking flight,” according to a column on HelloGiggles.com. “Its most recent entry goes by the alias 'sushito' and now it’s weird to think of a world before this invention.”

Because sushi is not the most easy thing to eat—especially at 3 a.m. after a night out—the idea of combining all the components of sushi rolls into one tidy wrap is catching fire.

Komotodo founder Alonzo Martinez says his inspiration came from a trip to Asia, where restaurants would serve oversized sushi rolls filled with meat, vegetables and fruit. While several Komotodo burritos feature raw fish like King Salmon and Yellowfin Tuna, others are filled with sirloin steak, chicken or tofu.

Menu consultant Nancy Kruse talks often about the hip fusion trend. She recently wrote in Nation’s Restaurant News that “gastronomic interchange”—or culinary staples from different regions of the world mixing—is easier today as American foodservice professionals have the opportunity to interface directly with chefs from around the globe.

She later told NRN that while many trendwatchers might tout the return of fusion, she thinks it never really went away.

“I think fusion is really fundamental to American cuisine. From the time the first wave of immigrants arrived on our shores, they had to integrate their native foods with the ingredients that they found here. All of this came together and we ended up with a population of American consumers who were absolutely comfortable with the notion of what we’re now calling fusion,” she said.