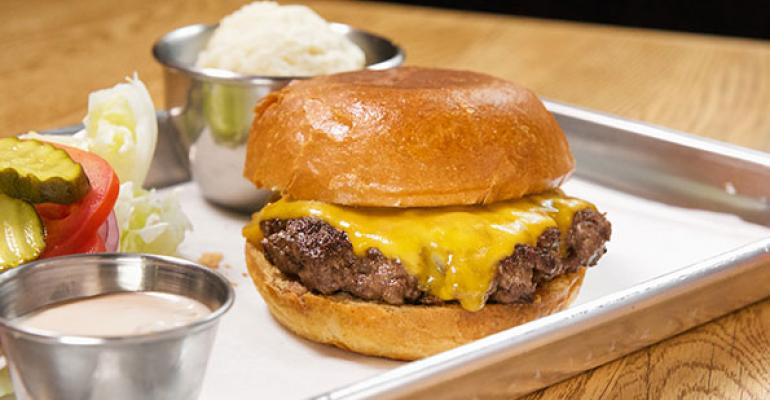 How to re-create the classic hamburger

It was one thing for Jingbo Lou and Christian Page to gamble on reviving a classic burger joint. Doing it in the middle of Koreatown, a diverse neighborhood just west of downtown Los Angeles, made it an even riskier proposition.

But that’s exactly what the two dove into when Lou bought the defunct, 70-year-old Cassell's Hamburger concept and brought Page on board to manage it. Four blocks down from its original location, the pair have opened Cassell’s at Hotel Normandie, a historic and architecturally stunning building that has been restored and converted into a boutique hotel.

What makes Cassell’s different than the four burger concepts you passed on the way there? It’s the homage that Page is paying to Koreatown history. He’s keeping Cassell’s nearly exactly the way Al Cassell built it in 1948, starting first and foremost with the recipe and preparation of Al’s Classic American Hamburger. He’s using the same meat grinder and the same unique cross-fire broiler that Al designed to fry his burgers from the bottom while broiling them from the top.

Since opening, reviews have been enthusiastic, both from those who remember Cassell’s in its first incarnation and a younger crowd looking for clean, responsible food. “Just a good, classic, no BS burger,” says one Yelp review. “Taking a classic and elevating it to this level is not easy, but they somehow managed to do it.”

So what’s the secret?

“Al’s focus was always on the meat,” says Page. “Buying whole chuck with great marbling and grinding it fresh every day.”

• Pack the patties loosely so the seasoning penetrates deeper into the meat and the burger breaks apart in the mouth. “Form the ball delicately,” Page says. “You can’t just bang the thing around.”

• Patties should weight 6.05 ounces, which will cook down to one-third of a pound.

• Use a super-hot griddle and cook burgers anywhere from 500-550°F to add a a light crust around the edges of the patty.

• Cook to medium rare. Grinding the meat in-house should lessen concerns about serving undercooked beef because presumably the meat should be clean and safe. “Grinding whole muscles gives a clean consistency,” he says.

• Only flip once and only add cheese once.

• Staying true to Al Cassell’s original concept, Page doesn’t offer fries but instead serves what he calls an “American banchan,” or little dishes like potato salad, pickles, chips and coleslaw.