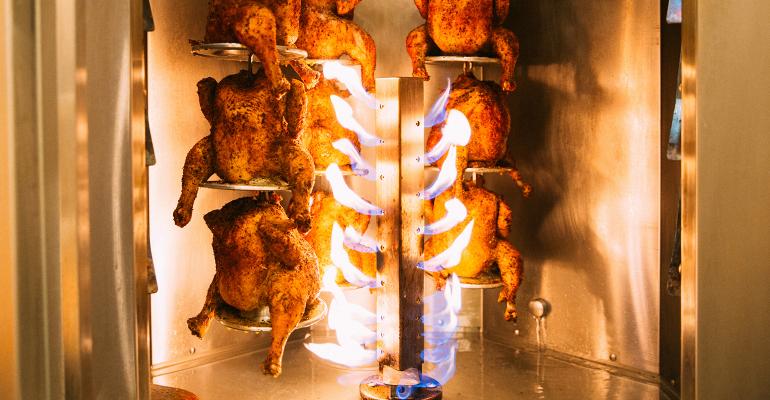 Lettuce Entrain You Restaurants
Chickens get fired up on the spit at Rotisserie Ema in Chicago.
Food & Drink>Food Trends

A fresh spin on rotisserie chicken

It’s in every grocery store, but a new wave of restaurants aim to do it better

Americans love their chicken, especially the spit-roasted, slow-cooked whole birds that have long been the signature prepared food offering in grocery stores.

Lately, however, a growing number of independent restaurants and emerging chains are specializing in high-quality rotisserie chicken with a fresh spin, giving consumers another option for getting their chicken fix.

According to the latest data from the National Chicken Council, of the 900 million birds sold as rotisserie chickens in the U.S. last year, nearly one quarter were sold to restaurants and foodservice, up 1.5 percent over 2015. The remaining 700 million went to grocery and retail outlets. Part of what’s driving the rotisserie-restaurant expansion is “perhaps the restaurant industry is tired of watching supermarkets sell tons of mediocre chicken for people to eat at home, and restaurateurs want a piece of this action,” said Michael Whiteman, president of Baum + Whiteman, a Brooklyn, N.Y.-based food-and-restaurant consulting company.

In fact, rotisserie chicken restaurants have become such a thing, Whiteman is expressing caution.

“If enough people try riding the rotisserie wave, we’ll see another franchising fallout that resembles what happened to frozen yogurt,” he said.

And at a time when delivery and takeout are becoming increasingly important components of any restaurant concept, rotisserie chicken checks all boxes, said Jason Isch, general manager at Brider, a “fast-fine” rotisserie-chicken concept in Denver.

“Rotisserie chicken is so popular because it’s not only crowd-pleasing and delicious, but it’s gold for multi-unit, fast-casual concepts. It’s quick, consistent, and travels well,” said Isch.

At Brider, which opened in January 2016, rotisserie chickens are brined, seasoned and then cooked in a Rotisol oven imported from France. The restaurant also has rotisserie-roasted porchetta and leg of lamb. Guests can select rotisserie chicken that is also fried.

For $18, for example, guests can choose a half an herb-rubbed chicken with lemon-and-chili wilted kale, roasted potatoes and chicken au jus; or with a side of fried rice, egg, crispy garlic and ginger, sesame and house kimchi; with couscous with feta cheese, tatziki, harissa, cucumber and red onion; or madras curry, jasmine rice with coconut.

“What makes us different is the passion we put into our food and the quality and standards we maintain. There’s a level of care that goes into all of the food we make that you won’t find at your local grocery store or market, ” said Isch. “It’s also a convenience thing. Brider is a one-stop destination where you can get a full, composed meal made with fresh, seasonal, high-quality ingredients. It’s restaurant quality, but it’s easy too.” Recently opened Hendrix in Laguna Niguel, Calif., a 180-seat upscale-casual eatery focused on seasonal American fare, features an eight-spit rotisserie that cooks whole organic chickens brined in lemon, garlic and herbs, as well as lamb and pork, in full view of diners. Guests can then order the chickens as a platter for two or more guests for about $19, or as part of a rotisserie sampler featuring a selection of meats to share for $25 per person.

“Everybody likes chicken,” he said. “I always wanted to do a rotisserie concept. It cooks better, easier, so much more flavor.”

Like Brider’s Isch, Schwarz said there’s no comparison between the rotisserie chicken he serves and what’s available from a grocery or big-box retailer.

“The proof is in the brine,” said Schwarz, which for his chickens takes about two days. “[The result is] fall off the bone, but still super moist inside.” To differentiate from the countless places New Yorkers can order a prepared rotisserie chicken, at Nobody’s Perfect in the East Village all-natural whole rotisserie chicken is served upright on a bed of French fries with legs crossed, feet still on. The bird then gets cut up tableside. Priced for two, it’s $34; and $48 for four.

“It’s original, a little bit shocking so people can talk about it,” said Mario Carta, founder of Nobody’s Perfect. “People love it.”

Cooking chicken in a rotisserie oven is also a simpler process than using a grill or fryer, he noted. “You don’t need a lot of people to do it,” said Carta. It’s “the best way of cooking chicken and it reduces labor costs.”

Other operators who have hatched, or are planning to hatch, rotisserie chicken concepts are differentiating themselves with sauces.

The latest concept from Fox Restaurant Concepts, the group behind brands such as Flower Child and True Food Kitchen, is Doughbird Pizza and Rotisserie, which opened in April.

The 160-seat restaurant in Phoenix features rotisserie chicken and other meats served with a choice of sides, such as cauliflower mash or quinoa tabbouleh, and one of nine sauces, such as chipotle barbeque, spicy buffalo hot sauce or Jamaican jerk marmalade. A whole bird is $24 and a half is $17, both with a side and sauce.

“The sauces and sides are the differentiator for us,” founder Sam Fox said in an interview with Nation’s Restaurant News last month. “So many people can eat there in different ways. Today, customers want to design their own meal. The rotisserie really allows that.”

Chickens are free-range and raised without antibiotics. A whole chicken is $21; half is $14 and a quarter bird is $7. Wings, tacos and a “killa” kale salad, to which chicken can be added, are also on the menu. At Rotisserie Ema in Chicago, Lettuce Entertain You Restaurants’ fast-casual counter concept is a Mediterranean- and California-inspired take on rotisserie chicken. The concept shares a kitchen with the full-service Mediterranean concept Restaurant Ema, helmed by chef C.J. Jacobson.

“What makes Rotisserie Ema different is our house marinade and spices,” said Marc Jacobs, Lettuce Entertain You Restaurants’ president and partner. Rotisserie plates or open-faced sandwiches are served with a choice of salads, varying selections from the hummus bar, house-made bread, tzatziki and zhoug — the latter is an Israeli herb-and-chili pepper relish.

With Wild +Free, a fast-casual rotisserie chicken concept slated to open in late summer in the Los Angeles neighborhood of Sherman Oaks, Terry Heller is planning to capitalize on both better-product and singular flavor profiles.

“Our chicken is going to be fresher, have more of a point of view,” said Heller, who is part of the group behind the small chain Plan Check Kitchen in Los Angeles.

Though the menu is yet to be finalized, Heller said Wild + Free will offer four to five different bold flavor profiles for its whole, half and quarter rotisserie chickens.

“We’re not going to find a safe place,” added Heller.

In addition to broad appeal to consumers, ease of operations is among the drivers of franchise expansion for some emerging rotisserie chickens chains. For example, The Chickery, a small rotisserie and fried chicken franchise that debuted in Toronto in 2012, last year opened its first U.S. location in Washington, D.C. and has plans to add several new more locations before the year is out.

As a franchise, rotisserie chicken “is easy and cheap” to operate, said Thomas Abraham, The Chickery’s director of operations. The menu is short and simple and it’s a low labor model.

At The Chickery, whole chickens raised without added hormones or antibiotics are marinated for 24 hours in a salt brine, then dusted with a “secret” rub containing 10 different spices before going on the rotisserie, and then dusted again just before serving.

Additionally, the chain also recently added to its menu Rotisserie Fried Chicken, a rotisserie cooked chicken that is dipped in the chain’s signature buttermilk batter and then flash-fried to a crisp.

“It looks amazing, the smell when you walk in the door,” said Abraham of the new location. “You take a bite and all these juices [are] pouring over your mouth. It’s exciting.”

This story has been updated to correct the spelling of Doughbird.
0 comments
Hide comments
Recommended Reading