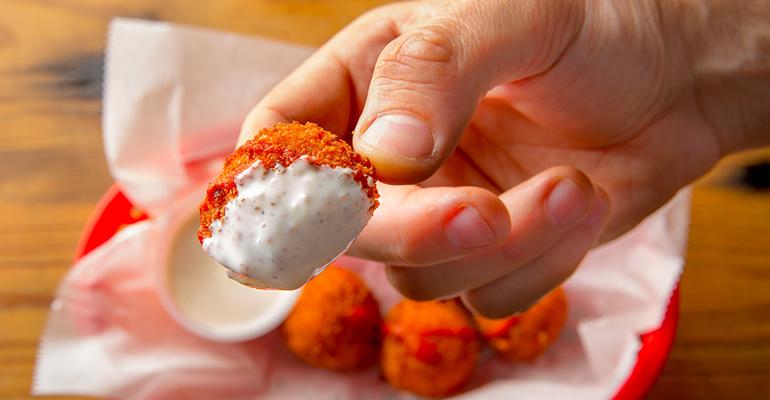 Brunch has evolved from a stuffy Mother’s Day ritual into a weekend highlight.

By combining flavors and cuisines from breakfast, lunch and dinner, brunch has become a social staple that celebrates relaxation and encourages the expansion of culinary horizons.

Gather, in Boston, offers a “Game of Thrones” brunch, inspired by the HBO television series, including a “Milk Of The Poppy” bloody Mary. And across town, Back Bay Harry’s Beyoncé-themed brunch attracts guests with an “All The Single Eggies” dish, whose name riffs on the performer’s song “All the Single Ladies.”

These themes and intriguing culinary combinations garner attention, but the communal atmosphere is what has made brunch a staple.

“Everybody is off on Saturdays,” said Donnie D’Alessio, owner of Queens Comfort in Astoria, N.Y. “Everybody loves breakfast; everybody can take the time and make an event out of it.”

D’Alessio’s summation of brunch’s differentiating factor is spot on: While dining out is typically a shared activity, this particular meal was born specifically to serve as a social event. “We have the house party vibe — that’s something of value,” D’Alessio said of his restaurant.

Queens Comfort has a casual-cool atmosphere. The walls are adorned with action figures and sci-fi memorabilia, and cult movie classics play on a projector screen. In less than a decade, it has become a local hotspot.

On weekends, lines snake down the sidewalk for a taste of guilty pleasures such as The Pig Mac, a fried pork tenderloin sandwich topped with pickles, onion and Sriracha aioli; and the Cap’n Crunch Crusted Chicken Sandwich.

The restaurant’s signature dish is Atomic Fire Balls, deep-fried globes of macaroni and cheese with Sriracha and ranch dressing.

After a scheduled catering event was rained out in 2011, the Queens Comfort team found itself with a surplus of prepared macaroni-and-cheese trays. After adding Sriracha and ranch dressing to the mix, the trays of cheesy pasta were rolled into spheres and deep fried. Atomic Fire Balls became both an instant and accidental hit.

D’Alessio said competitors have been influenced by the spicy balls, but he doesn’t mind the imitation for the most part.

“Some people come a little too close,” he said with a slight laugh.

While some aspects of the Queens Comfort experience have been mirrored elsewhere, the restaurant’s commitment to indulgent foods remains unmatched in the area.

“It was a process,” D’Alessio said. “We had no idea what we were doing when we first started.”

FARM at Carneros, located on a 28-acre property in Napa, Calif., brings its own approach to brunch, heightening the social factor by implementing a family-style experience. “From the first thought of launching brunch at FARM, we wanted to have an approach that was different from the other brunch options in town, while keeping our focus on an elevated experience,” executive chef Aaron Meneghelli said.

He described the meal as a “communal gathering.”

“With our outdoor seating and view of the FARM Pavilion, it is a perfect setting for outside dinning,” he said.

The brunch menu has 16 options, and each table is asked to pick four items that will be shared. Guests can make their selections as a group, but still receive individual portions.

“The items will come out semi-coursed, and most of them will be individually portioned for the table,” Meneghelli said. “We have plenty of additional items, such as beignets, oysters and caviar, and seasonal cocktails.”

At $45 per head, guests can choose from lobster rolls with bacon and Pink Lady apples; potato tostones with California caviar, crème fraiche, dill and mint; and a sweet corn johnny cake with barbecue beef short rib, garden chard and a sunnyside egg.

The bestselling brunch item is smoked chicken and waffles. “We cold smoke the chicken thigh before it is soaked in our marinade and then later fried to order,” Meneghelli said. “The chicken is served with a maple Belgium waffle, pepper jelly and powdered sugar.”

The restaurant invites guests to stay and enjoy the grounds after they’ve finished their meal, and offers live music and lawn games like bocce.

On the East Coast, Nitehawk Cinema in Brooklyn, N.Y., is also bringing people together for brunch, even if talking during the meal is discouraged.

“For all of our first-run movies, we have a special that’s linked up to the film,” said executive chef Kurt Applegate.

In June, the theater screened “All Eyez On Me,” a biopic of the late rapper Tupac Shakur, accompanied by a dish called California Love, composed of crispy chicken wings bathed in a smoked Hennessy hot sauce.

According to Applegate, this particular meal was Shakur’s favorite food.

“It’s fun because whenever our customers see these movies and they see the specials, a lot of the time they’ll order the specific food special or drink special during the film they’re about to watch so they can experience that ‘a-ha’ moment,” he said.

Although a movie theater is not a typical brunch setting, a trip to Nitehawk scratches a crucial brunch itch, Applegate said. “We thought it might be best to offer a brunch-forward menu because it is time to cure that hangover,” he said, adding that the meal “lends itself to certain thematic elements.”

While each restaurant has its own formula for a successful brunch program, the foundation for each is the same: Providing a social experience with crave-worthy food keeps the tables full on weekends.