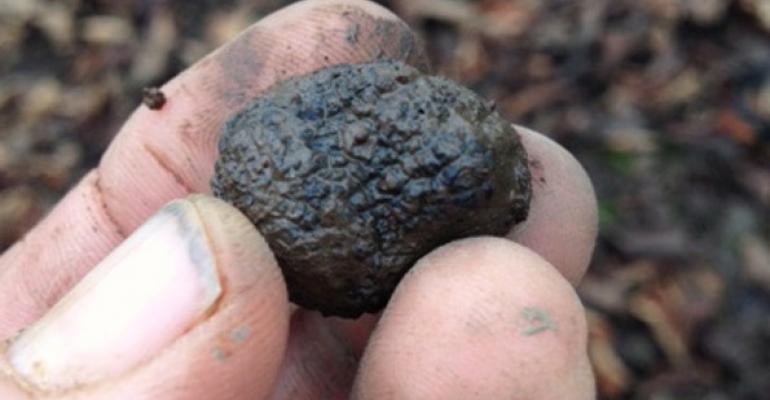 We wish we could say the cost of super-expensive truffles was going to come down soon. That’s not in cards right now, but at least it looks like their availability will soon pick up. Growers in Oregon and Idaho have successfully cultivated their first batches of certain types of prized truffles—good news for restaurants that cater to a cost-is-no-object clientele, or would like to.

The location of the two-acre hazelnut orchard where the Oregon’s first Perigord (i.e., black) truffle was grown is being kept under wraps. The owner is remaining anonymous until security arrangements are made to safeguard what promises to be a highly valuable crop. We do know that the first specimen was found on Feb. 28th by Kris Jacobson and her Belgian Malinois, Ilsa, of Veneta, OR-based Umami Truffle Dogs.

What the big deal here? With prices of fragrant black truffles sometimes reaching $1,500 a pound— when you can get them—it’s a highly lucrative enterprise once farmers have built their operations out to commercial scale.

The taste, of course, has always been a big deal. Truffles are the original flavor bomb. Ask any chef: a few truffle shavings on almost any dish takes its flavor over the top immediately. At Restaurant Guy Savoy in Las Vegas, the noted French chef gets $68 a bowl for his signature Artichoke Black Truffle Soup. It’s basically just a really well made artichoke soup that’s finished off with a sprinkle of black truffle shavings. No one’s complaining about the astronomical price.

Oregon isn’t the only state that hopes to capture a bigger share of the truffle market. In February of last year, a grower in Idaho harvested the first North American-cultivated Bianchetto truffle, also known as the Italian spring white truffle or Tuscany white truffle. It came from an orchard near Boise where the grower had planted oak and hazelnut trees whose roots host the truffles. Sophia, an Italian truffle dog, sniffed out the first truffle, which was located eight inches underground.

Both these ventures are customers of Eugene, OR-based New World Truffieres, Inc. A glance at this company’s website will have you asking not why truffles can cost $1,500 or more per pound, but why they don’t cost even more. An aspiring truffle grower has to pay out a lot of money up front and then wait years before his or her specially inoculated truffle-hosting trees produce a cash crop.

But there’s a lot of cash produced for those who can wait it out. The Truffieres site says cultivated truffle production in Europe can produce yields of 100 pounds or more per acre per year for decades. Doing the math, that’s $150,000 per acre per year times, say 20 years…no wonder entrepreneurially minded farmers are giving this a try.

This cultivation method has proven to work where soil and climactic conditions are favorable. Truffles were once mostly hunted in the wild in Europe, but a large and growing percentage of the crop there is now cultivated. In the U.S., farms in two other states, Tennessee and North Carolina, have already found success cultivating black Perigord truffles.

Right now, only a handful of elite U.S. restaurants offer customers high-end truffles, often via costly special truffle-themed dinners. Some sell truffles by the gram, shaving them tableside. Let’s hope a change in the supply/demand ratio will soon make truffles accessible to more restaurants. With foodie-driven interest in all things local and regional still on the rise, we know the market for the full-blown truffle dining experience is there.

If you want to learn more about which truffle varieties you may want to purchase or avoid, check out La Toque chef Ken Frank’s breakdown. You’ll have to scroll down a few paragraphs to get to the most pertinent information, but this much-honored Napa, CA, chef pulls no punches when discussing his restaurant’s truffle purchasing guidelines.