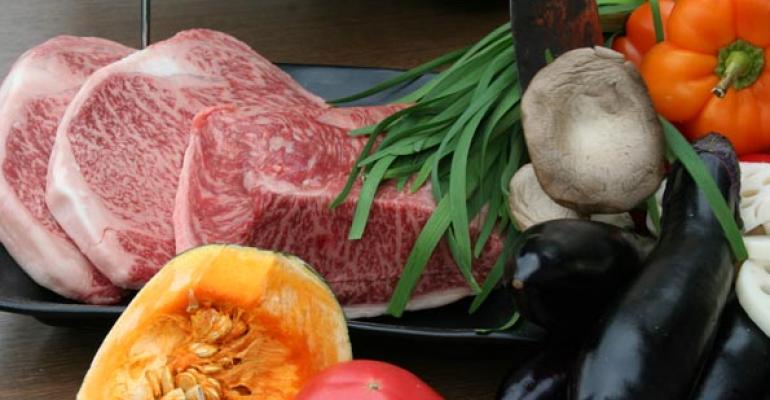 A closer look at sushi, Kobe

Many American chefs are obsessed with Japanese foods and techniques, but how much do we know about items like sushi and Kobe beef? To settle the debate between faux-be and Kobe and to understand the origins of sushi, chef/consultant/TV host Walter Staib recently traveled to Osaka. He visited cattle ranches and fishing villages, met with masters of the trade and cooked for his PBS show A Taste of History.

First on the agenda was demystifying sushi. Originally developed in the Edo period in the 17th century, sushi evolved from a whole fish packed with vinegar and rice, then left for a few months and up to two years to ferment. This natural curing process ensured families had protein in their diets year-round. It also made fish easily transportable. The Imperial Palace was inland in Kyoto, making preservation methods highly useful. Eventually, cooks started serving the vinegar rice with fish slices. Sushi, in the form we know it, had evolved.

Sushi is so much a part of the American diet that it’s made its way into convenient stores and supermarkets nestled into prefab containers. Chefs have added their own twists, putting cream cheese and tempura shrimp in rolls and dousing them with spicy mayonnaise. In Japan, however, sushi making remains a subtle art form.

Some traditional sushi masters make it using no seaweed. Yukio Ozaki maintains this centuries-old style at Matahei Restaurant in Kobe.  His restaurant has no tables. A dozen stools are lined up at the sushi bar. This intimate setup is common.

“All over Japan, I saw countless 20-seat restaurants that just wouldn’t work in the U.S.,” Staib says. “They specialize in one type of cuisine only. It’s udon or sushi, Okonomiyaki [egg pizza] on the grill or yakitori [skewers].”

At Matahei, it’s sushi. Ozaki stands five feet tall, and his grey hair reveals decades in the industry. His practiced hands work succinctly slicing fish and garnishing it with ground wasabi root, pickled yellow daikon or finely kinako (finely ground soybeans). Ozaki strictly uses short-grain rice, rice vinegar and fish that he molds together in his palm. With so few ingredients, each one must be at its finest. One of his apprentices drives to a nearby fishing village to collect the day’s catch. Ozaki sources vegetables from nearby farms and uses the most traditional rice vinegar.

For Ozaki, it’s not going back to basics, it’s sticking with them. He is among legions of chefs who have not wandered the way of quasi-cuisine. Staib got to the root of it by meeting fishermen in a hillside hamlet where families inherit boats and nets from their grandparents.

Then he went to the home of Marukan Rice Vinegar. President Denzaemon Sasada explained the family recipe that has been used for generations. It was introduced to the Imperial Palace in the 1600s.

In a tour of the plant, production manager Keiichi Inoue took Staib through the process of washing short-grain rice, making sake and fermenting the sake in large vats with natural yeast lying on top in delicate patterns of lacy netting while the vinegar ages in wood casks and distilled.

“It was almost like touring a winery, with the smells of yeast and aging casks, but they wouldn’t let me drink the sake,” Staib says with a laugh.

He did have a taste of the original style of sushi. The whole fermented fish, scales, tail and head intact, was unpacked from vinegar rice. The orange roe burst through the slices on the bias of the fish.

“It was very unique. It tasted like fish sauce and Camembert,” he recalls.

On a different tour, Staib had a more envy-worthy opportunity to eat Kobe beef.

He explored the Nanatsuike Bokujo farm. While there, Staib grilled two hefty rib eyes and a strip loin. He set up a grill on the sloping hills near grazing calves. Staib cooked about 6 pounds of Kobe beef that afternoon, which wholesales for approximately $150 per pound.

“It was spectacular. I ate about a pound of that beef while I was grilling it on the ranch. It’ll be a while before I get that quality from the source again,” Staib says.

Yuichiro Hirai, president of the Hirai Bokujo cattle company, operates an internationally award-winning ranch that was among the first to resume exporting to America after a USDA embargo was lifted in 2012.

He was exactly as one might picture a cattle hand, with his black cowboy hat tilted over his unwieldy eyebrows, his skin hardened from years in the sun. Through the help of a translator, Hirai said he wants Americans to understand that true Kobe beef must be from the Hyōgo prefecture and that quality is in the land and the time-honored techniques of handling. Just like Champagne must hail from Champagne, France, for the grapes to soak in the terroir and emanate in the wine.