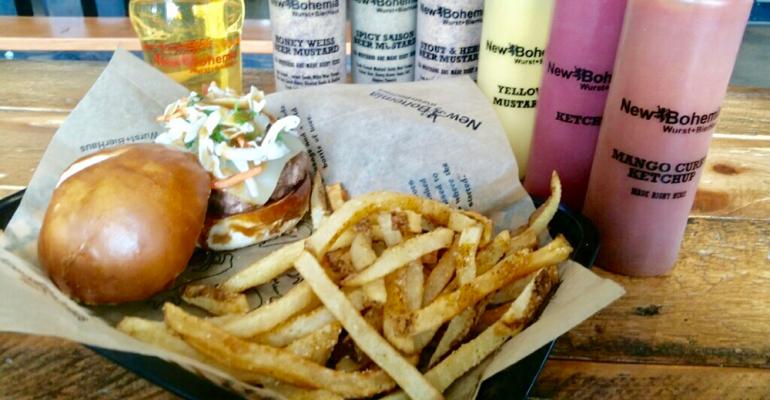 Chefs get creative with burger patties

Sausage, grains, mushrooms and more are getting ground up

Americans love burgers, and restaurateurs have long sought to distinguish their particular versions of the archetypal lunchtime meal by putting creative sauces and garnishes on top of the classic patty.

But these days operators are tinkering with the patties themselves, not merely substituting beef for turkey or bison (or elk or wild boar), but mixing their meat with grains or mushrooms to change their nutritional profile, or mixing in spiced and cured meats to goose the burger’s flavor.

Brian Ingram and his team did the latter at New Bohemia, an eight-unit beer hall based in Minneapolis.

The restaurant focuses on craft sausages, but Ingram realized as the chain was growing that adding burgers to the menu would likely help increase guest frequency.

“People might eat sausage once a week, but they might eat a couple of burgers,” he said.

But to stick with the restaurant’s theme, he met with local manufacturers who would grind ground beef with other meaty products, such as aged beef fat or corned beef.

New Bohemia’s Reuben Burger combines both of those with ground chuck. Ingram said the aged fat “is kind of truffley, caramelly in flavor.”

The restaurant also has a burger blended with bacon and pork belly and another with Cajun-style andouille sausage.

“We really wanted to come up with something that no one else was doing,” Ingram said.

Having the other ingredients ground with the beef by their manufacturer also makes it easier to keep the burgers consistent, Ingram said. “[Cooks] can get it and cook it right on a grill, rather than have five items where they might have a possibility to mix it up,” he said.

It also makes the burgers less cumbersome to eat: By blending corned beef into a burger instead of putting it on top, the sandwich isn’t stacked so high and it gives his cooks room to top it with beer-brined sauerkraut, which is what they do.

Although New Bohemia is primarily known for its sausages, the burgers “do incredibly well,” and now account for 30 percent of the product mix.

“The burgers have literally taken on a life of their own,” Ingram said.

At Staks Pancake Kitchen in Memphis, Tenn., the Famous Staks Breakfast Burger is made from a 60/40 blend of beef and breakfast sausage topped with bacon, hash browns, a fried egg and Sriracha mayonnaise on an “everything bun” with similar toppings to an everything bagel.

“It’s just to give it a more breakfast flair,” said general manager Eric Bush, who said his customers love the item, which has been on the menu for about a year.

“I haven’t had anybody try it that wasn’t blown away by it,” he said.

The practice of blending other meats with beef in burgers is picking up steam, and six-unit southern California chain Slater’s 50/50, which makes burgers that are half beef and half bacon, has built its whole concept around the idea.

But an even more prevalent trend is blending meat with ingredients that will change the burger’s cost, nutritional profile, carbon footprint or all three.

For example, at LocoL — a three-unit chain founded in Los Angeles by celebrity chefs Roy Choi and Daniel Patterson to serve wholesome, affordable fast food in underserved communities — the chefs were looking to serve a burger made with premium beef for $5. As California Sunday Magazine reported, Patterson combined the ground beef with tofu, barley, quinoa and seaweed to create a patty that was delicious and nutritionally balanced. It’s topped with Monterey Jack cheese, a relish made with burnt scallions and lime, and an umami-heavy sauce based on tomato and the Korean spicy-sweet paste gochujang.

Probably the most popular ingredient to mix in with ground beef is mushrooms, which cut down the meat that’s being used, thus probably decreasing the sandwich’s carbon footprint. Depending on how the mushrooms are cooked, they can also decrease the number of calories in the burger, and depending on the mushrooms and beef that are being used, reduce the burger’s cost.

The concept was floated a few years ago by the Mushroom Council, which promotes the use of the cultivated fungi, at a time when ground beef prices were spiking. The cause has since been taken up by both the James Beard Foundation and The Culinary Institute of America. In fact, the latter served the so-called Blended Burgers at The Egg, the student center and food court at its Hyde Park, N.Y., campus, which feeds around 1,000 students each day.

Bruce Mattel, The CIA’s senior associate dean for culinary arts, said his students in the high-volume production class that make food for The Egg also combine lamb and bulgur in a burger. “We dress them up in a gyro or souvlaki style,” he said. They also do a Southwestern-style turkey and bean burger as well as beef and mushrooms. Mattel said the blends aren’t just being made for reasons of health and sustainability. “It also makes a really good burger,” he said.

“Mushrooms are pretty absorbent of juices,” he said. “By adding plant product, you can increase moisture content and get a better bind, he said.

Grains, which like the mushrooms are added cooked, also absorb juices released by the meat, he said.

“It’s best if the grains are even slightly overcooked. You want it to be very tender and not compete texturally with the meat,” he said.

“There are a bunch of students that are young and still crave the high-fat bacon double cheeseburgers, but more and more, as we expose them to these other burgers, they’re open-minded, he said,” adding that even if three of the 10 burgers a student might eat in a month are blended, “it still helps the cause.”

The Egg also rotates in winning burgers created by students at the school’s annual Burger Bash. That includes the Oooh! Mami Burger, which is a blend of meat and three types of mushrooms — cremini, shiitake and maitake — garnished with blue cheese and enoki mushrooms and served with crispy fried parsnips.

Students at Yale University in New Haven, Conn., also eat blended burgers. They’re made by baking finely chopped mushrooms — to about the same texture as ground beef — on sheet pans, with no oil, at 325 degrees Fahrenheit for 35 minutes, mixing them at 15-minute intervals. One part of the mushrooms is mixed with two parts ground beef for the burgers.

“I’m absolutely amazed at how good these burgers are,” said Ron DiSantis, the university’s director of culinary excellence. “The umami impact of the [mushrooms] impacted positively the beef flavor of the burger,” he said, adding that even employees who said they didn’t like mushrooms were converted.

“That’s when you know you really hit home,” he said.