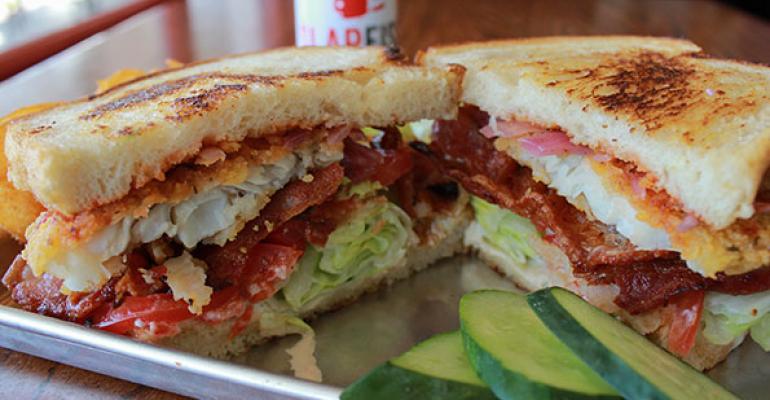 Chances are, most of your guests have eaten catfish before.

Maybe they caught one during a camping trip as a kid and later dad helped them cook it over an open fire. Or maybe they’re from the South, where backyard fish fries often feature catfish battered with cornmeal and served with French fries and coleslaw.

But, chances are, they haven’t ordered catfish from a sit-down restaurant. Because catfish is a bottom-feeding fish in the wild, it is often perceived as dirty and unhealthy.

However, chefs at both upscale and casual establishments have found new ways to clean, season and prepare the fish. And catfish—high in Vitamin D and often containing low levels of omega-3 fatty acids—is popping up on menus across the country.

Chef Matt Daughaday at Taste, a modern speakeasy by James Beard Finalist Gerard Craft, grew up eating catfish but had never served it in a restaurant setting. He had tried salted cod bites on the tapas menu, but the dish didn’t go over well. Nostalgia led him to try Catfish Croquettes, smoking the catfish to bring out new flavors, frying them in a cornmeal breading and serving with Tabasco aioli and creamy coleslaw.

“We had done the dish with regular cod but it never won over the guests,” Daughaday says. “I was honestly fairly surprised about the positive response we got from catfish.

“For a lot of people it brought back memories of their childhood,” he continues. “Being from St. Louis, it makes sense to use a fish that people are familiar with.”

Chef Don Drake at Magnolias in Charleston, SC, has a blackened catfish on the menu served with dirty rice, fried green tomatoes, habanero chutney and tomato butter. Twisted Spoke, a biker-inspired bar and restaurant in Chicago, has a buffalo catfish sandwich featuring a plank of catfish beer-battered, fried and tossed in tangy housemade buffalo sauce.

“Catfish has been popping up on menus throughout the U.S. because it is relatively inexpensive,” says Gruel, who serves catfish in various forms at SlapFish, including a po'boy, cornflake catfish taco, catfish fries and a cajun catfish grinder.

The economics intrigued Daughaday too. Taste serves only small plates and very few dishes are more than $10 or $12, yet Daughaday tries to be generous with portion sizes.

“When you’re trying to give a good portion size, it’s hard to use any sort of seafood, really,” he says, adding that the Catfish Croquettes have helped him overcome that challenge.

However, not all catfish is created equal, and Gruel says it's important to look for the country of origin. U.S. catfish “differs in flavor than many of the other imported species that come from muddy waters or questionable farms,” he says.

As sustainability becomes more important to diners, more restaurants are introducing new cuts of meat and seafood species on their menu. Getting creative with catfish allows restaurants to be mindful of overfishing the more popular breeds, and diners are finding catfish to be as tasty as they once remembered it.