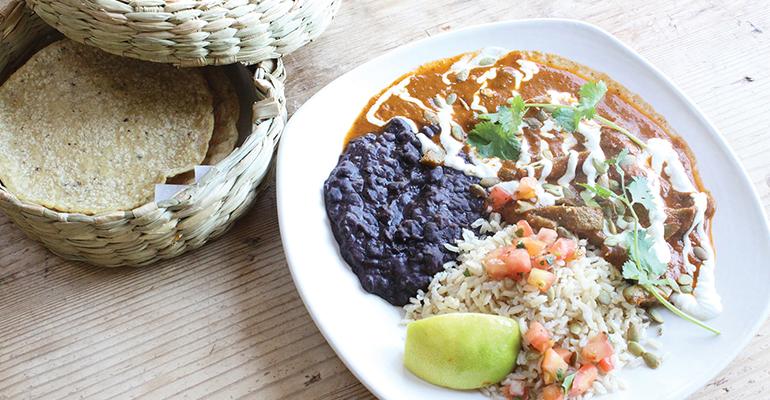 Nopales appear in everything from cocktails to dessert

Could nopales, aka prickly pear cactus, be the next “it” ingredient?

Chefs are braving the prickly exterior and coaxing out amazing flavor. They’re also learning how to deal with the “slime factor.”

“It goes great with citrus or meat,” Smith said, describing a few of the ways she has put cactus in the spotlight at Puesto. Puesto’s nopalitos, or cured nopales cactus, mingles with pickled red onions, cherry tomatoes and queso fresco in a salad or small plate that evokes the perma-summer of sunny San Diego.

Cactus paddles are cooked for Puesto’s zucchini and cactus taco. They combine with zucchini in calabacitas, a traditional veggie side dish in Tex-Mex cuisine, with avocado-cilantro-tomatillo salsa in a blue-corn tortilla topped with cheese.

And there’s a cactus cocktail at Puesto: La Verdad (tequila blanco, agua fresca de nopales cactus and lemon). Also on the cactus-forward menu is a nopales-lime gelato, a dairy-free treat that’s topped with Tajin, a cult-favorite spice in the Southwest. It was created in collaboration with La Jolla gelato company Bobboi Gelato. One stumbling block Smith and other chefs have found in working with cactus is the slime factor.

“When preparing cactus, I combat the sliminess in a few different ways,” she said. “Our cooked version [in the zucchini and cactus taco] is actually twice cooked and strained after the initial cook process in order to remove the gelatinous liquid that leaches out of the cactus.”

In Puesto’s salad version (nopalitos), the cactus is pickled then rinsed under cold water.

To cut the slime, chef Michael Beckman of Truss & Twine in Palm Springs, Calif., cuts cactus into strips and blanches them, a step he said “removes 90 percent of the slime factor.” As far as dealing with the prickly parts of cactus, Beckman simply buys cactus from a market that removes the needles.

The cactus variety he uses most is called opuntia, a type of cactus in the prickly pear family that’s farmed for consumption. He’s tried several others while hiking and foraging in the desert and he’s even taken some from his own front yard.

“Anything that has the paddle shape and produces fruit” can work, Beckman said.

He goes from savory to sweet with cactus on the menu. When going for a savory profile, he adds acid, fat and heat in the form of tomato, tomatillo or citrus; olive oil and Fresno or serrano chiles.

The cactus confit with citrus peel and star anise at Truss & Twine begins with cactus cut into strips and cooked for just under two hours in a confit with cinnamon sticks, star anise, cloves, lemon and grapefruit peels and raw sugar.

“Cactus is quite simple to prepare,” Beckman said. “Cut it into strips and simmer it in water or a stock. It can be used in a wide variety of dishes: salads, tacos, braises, scrambles.” Cactus can also make a splash with seafood, as demonstrated at Nikkei, an upscale Japanese-Peruvian restaurant in Dallas, where cactus in gel form is paired with oysters punzu Buena, featuring Beausoleil oysters, cactus pear gelée and ponzu.

At Gracias Madre, a plant-based Mexican restaurant in West Hollywood, cactus takes a comfort-food turn as part of a homey stewed dish that’s vibrant with color and soft and welcoming in texture.

And cactus is getting a modern makeover at Chef Jason Alley’s brand new taco spot Flora in Richmond, Va. Here, you’ll find cactus as an entrée with a downhome accent: fried cactus paddle stuffed with cheese and mushrooms in a chile-tomato sauce with rice and a side salad.

Here are five examples of cactus killing it on the menu:

At Puesto, with locations in San Diego, La Jolla and Irvine, Calif., cactus can be found in several ways. This taco features cactus, zucchini, corn, tomato and avocado folded into melted cheese in a house-made corn tortilla.

Cactus can be dessert as well, shown here also at Puesto, in a dairy-free gelato prepared by Bobboi Gelato in a proprietary recipe for the restaurant. It’s perfect when paired with mezcal. At Gracias Madre, cactus gets the down-home treatment of long, simmering stewing. The result is cactus as comfort food.