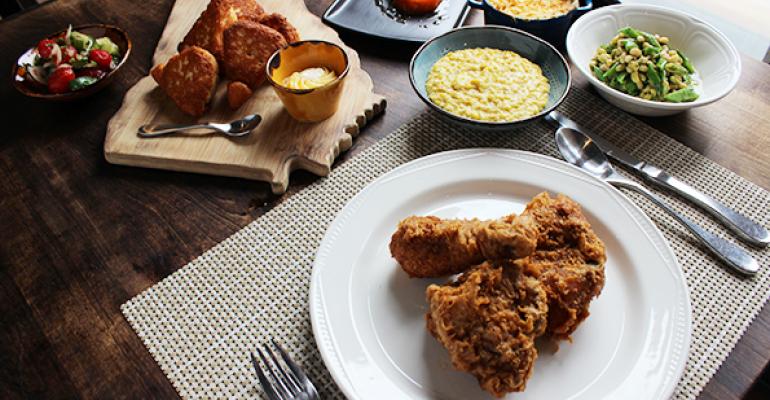 As restaurants around the country have discovered, you don’t have to wait for National Chicken Month in September to put your own spin on fried chicken.

Last spring, Brooklyn Bowl in Las Vegas expanded the popularity of its fried chicken by introducing a gluten-free menu option. Executive chef Dermott Driscoll prepares it with gluten free matzo meal flown in from Israel and a proprietary spice blend.  The gluten-free version is offered at the same price as the Bowl’s traditional fried chicken. Dinners ($18 for dark, $20 for mixed and $22 for white meat) are served with mashed potatoes and collard greens with bacon and honey. To celebrate its first anniversary back in March, the restaurant also offered a LTO cocktail tribute to its fried chicken. The Fried Chicken Martini was made with fried chicken-infused vodka (infused in-house) and served in a glass dipped in a bit of imported honey and the restaurant’s signature chicken seasoning. The garnish was a rosemary-skewered piece of fried chicken.