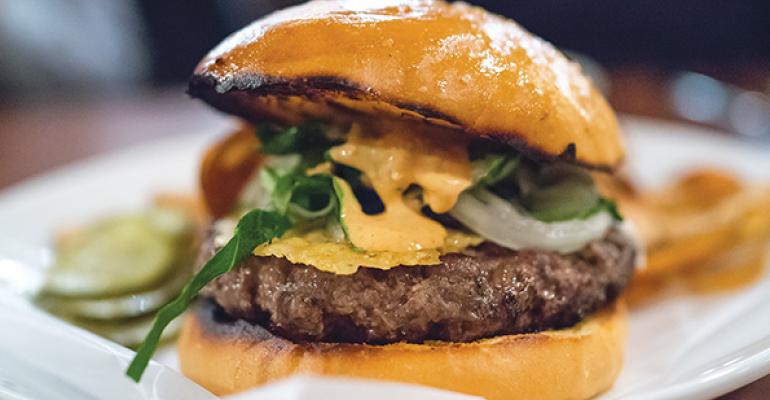 Check out these burger-and-cheese combinations for points of differentiation and better burger ideas from restaurants around the country.

Cheeseburgers at the 13 Bad Daddy’s Burger Bar locations might be said to be defined by the type of cheese.  Some, such as the Bad Ass Burger and the Pittsburgher Burger, feature the restaurant’s housemade American cheese. Others, including the Western Burger (a 100 percent buffalo burger) come with Monterey Jack cheese.

Chef Michael Symon’s B Spot, with eight locations in Cleveland, Columbus, Detroit and Indianapolis, features signature burgers and build-your-own options with eight $.99 cheese choices. Among the dozen-plus signature burgers are the Fat Doug (a burger with coleslaw, pastrami, stadium mustard and Swiss cheese) and the Yo! (a  burger with fried salami, capicola, hot peppers, shasha sauce and provolone cheese.

Wayback Burgers announced in August that it is partnering with Chef Dale Miller to lead the menu innovation team for its 100 locations. Burger variations on the menu include the Carolina (with yellow American cheese, slaw, chili, onions and mustard) and the Philly (with white American cheese, grilled onions and mushrooms). Chef Miller’s new creations include the All-American Burger for July and the Southwest Tumbleweed Burger for August (two burger patties with Mojave sauce, tumbleweed onions and Chihuahua cheese).

Toppings at Chef Hubert Keller’s Burger Bar at Mandalay Bay in Las Vegas offers a choice of toppings that include 10 cheeses. Topping categories range from The Garden or The Ocean (three large shrimp) to The Earth (black truffles or several mushroom choices), The Pantry (condiments), The Farm (bacon, prosciutto, pan-seared foie gras, and more), The Grill and three Fleur de Lys Sauces, including Black Perigord Truffle Sauce.  Other build-your-own options include meats (such as buffalo, BBQ marinated Angus beef and Kobe-Style Wagyu) and a variety of buns.