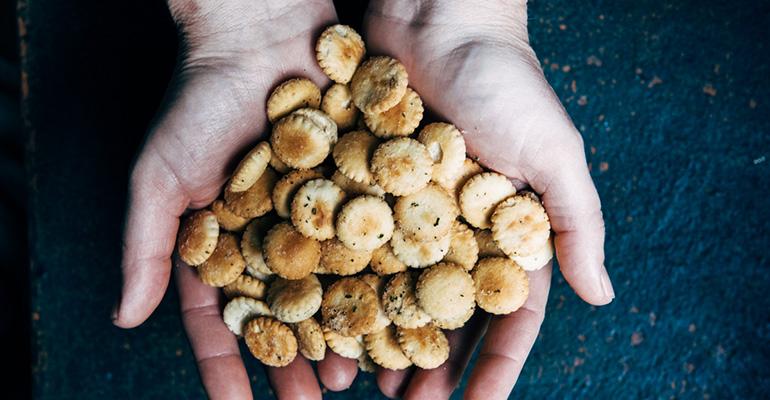 Bread baskets get a makeover

The traditional bread basket has recently been evolving. Concerns over gluten intolerance, waste and food cost have caused many chefs to forego pre-meal bread altogether. However, others have looked at the changing landscape as a way to reinforce their restaurant’s theme and create another way to stand out from the competition.

“I think it’s always important to offer something,” says Steve DiFillippo, owner of Davio’s Northern Italian Steakhouse in Boston. “The first impression you make with your guest is your bread service offering; it’s a welcoming amenity, which I believe is absolutely necessary, setting the tone for the rest of the evening and making your guest feel welcome.”

DiFillippo says he was noticing that a lot of waste from the existing bread offering. “I wanted to do something different and more creative. I was visiting Charleston, S.C., and had popovers; they were delicious. It was very nostalgic when we decided to offer them at Davio's, but we took a different approach. Ours are not as heavy as the traditional popover, and we serve them with Vermont butter, which is lightly salted. Now we make more than 10,000 popovers per month, for dinner only.”

Taking a cue from traditional Greek family dinners, chef Bobby Saritsoglou at Philadelphia’s Opa serves a dish called “Broken Plates,” which is crispy pita dough that’s been shattered into large pieces and drizzled with olive oil and sprinkled with salt. “Customers are often excited by the offering and always ask for more,” says Saritsoglou. “It pairs well with our modern take on Greek food and has established itself as a staple of the dining experience. It helps get the appetite going, too.”

Mazza’s secret to a successful complimentary pre-meal offering? “Be more open to exploration; there’s nothing wrong about injecting the feeling of play in the kitchen,” he says. “Practically, opt for less-traditional ingredients even if you’re preparing classic staples — a good example could be gluten-free or semolina bread. That simple twist will reinvent your bread basket and have your guests humming.”

Here are more examples of operators who are impressing guests with brand-minded pre-meal offerings.

• Sticking to its theme, Applewood Farmhouse Restaurant & Farmhouse Grill in Sevierville, Tenn., serves homemade apple fritters and apple butter at the start of each meal.

• Cold Storage in Chicago readies palates for perfectly shucked oysters and cold pints of beer with its waffle-cut potato chips, which are fried crisp and dusted with malt vinegar powder and Jacobsen sea salt.

• Chef Ben Thibodeaux weaves a coastal cuisine theme through Cavan in New Orleans, starting with complimentary oyster crackers, to which he adds a mixture of butter, herbs and spices before baking and serving to guests.

• Memphis Barbecue Co., with locations in Mississippi, North Carolina and Georgia, sets the mood by greeting each guest with house-made pork rinds.

• Jerry’s Restaurant & Deli, with four locations in Southern California, serves guests a variety of pickles before each meal.

• Complimentary appetizers are ever changing at Kabuki Sushi Bar & Steakhouse in Oxford, Miss., ranging from fried white fish to avocado salad and kimchi.