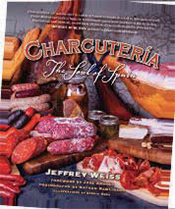 Charcutería: The Soul of Spain, by Jeffrey Weiss (Agate Publishing, $39.95)

With a foreword by José Andrés, photographs by Nathan Rawlinson and illustrations by Sergio Mora, this book offers an in-depth look not only at Spanish-style butchering and meat-curing, but also Spanish cuisine and culture. Charcutería includes techniques, tips, 100+ recipes, a glossary and even a listing of purveyors and other cool people. Readers can use this book as a practical guide, or as a tool for exploring Spanish culture, history and cuisine.

Author Jeffrey Weiss recently opened Jeninni Kitchen + Wine Bar in Pacific Grove, CA, with a menu featuring the cuisines of Southern Spain. His book, Charcutería, incorporates the experience Weiss gained from his ICEX Spanish Gastronomy Training Scholarship. Weiss says, “On a basic scale, most of the world’s charcuterie is similar—it’s all meat = salt + time." The difference from the Spanish perspective, he says, is that the Spanish flavors for charcutería are very bold and full of pimenton and garlic.

In Charcutería, Weiss explains how Spanish cured meats such as chorizo and jamon are linked to the country’s history and culture.  “Much of what we do at Jeninni is absolutely informed by the culinary and cultural spirit I saw in my travels in Spain,” he says.

In addition to offering the history and evolution of Spanish charcutería, Weiss details Spanish pork butchery, and provides basics about the way fresh, semi-cured, dry-cured and whole-muscle charcutería are produced. Recipes range from cured meats to salsas, pickled vegetables and desserts. Examples include Cantimpalos-Style Chorizo, escabeche variations and the “Salchichoc” Chocolate Sausage dessert that resembles sausage but does not include it as an ingredient. 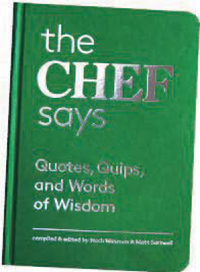 The editors, who own Kitchen Arts & Letters bookstore in New York City, have pulled together informative and entertaining quotes from chefs from around the world—including Lidia Bastianich, Mario Batali, Tom Colicchio, Thomas Keller, Marcus Samuelsson, Michael Symon and Alice Waters. Although The Chef Says serves up quotes from 150 chefs, most readers will probably devour the book (just slightly larger than a slice of Texas toast) in one sitting.

Waxman and Sartwell have collected quotes that provide a snapshot of working in a kitchen, demonstrating attitudes that range from wise to humorous to irreverent. As Auguste Escoffier (1846-1935) said, “The art of cooking is perhaps one of the most useful forms of diplomacy,” while Andre Soltner reminds us, “You can’t forget that you cook for customers. If you don’t have customers, you close.” This compilation reminds foodservice professionals why they chose their careers in the first place and captures the range of stress, lessons and humor found in professional kitchens.