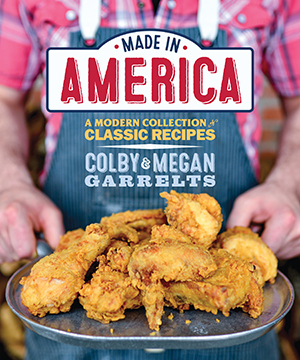 Made in America: A Modern Collection of Classic Recipes by Colby and Megan Garrelts (Andrews McMeel Publishing, 2015. $21.99)

Authors Colby and Megan Garrelts provide their own spin on American classic recipes in Made in America. Ideas include Fried Cinnamon Rolls; Fingerling Potato Salad with Spicy Tomato, Corned Beef and Pickled Okra and Madeira-Braised Chicken with Sour Cherries.

The Garrelts met while working at Tru in Chicago, and opened their first restaurant, Bluestem, in Kansas City, MO in 2004, followed by Rye in Leawood, KS, in 2012. In 2013, Colby Garrelts was a “Best Chef: Midwest” James Beard Foundation winner.

As noted in the book’s introduction, “The food of the Midwest is the last untold tale in modern American cooking, but it’s a central one—in every sense of the word.” Recipes in Made in America are influenced by family traditions and a seasonal approach to cooking, with an acknowledgment of the importance of substantial breakfasts for those who work the land, sweet comfort food desserts and menus for celebrations.

Don’t be surprised if these creative takes on traditional favorites inspire you to try a little more tweaking of your own family and regional recipes.