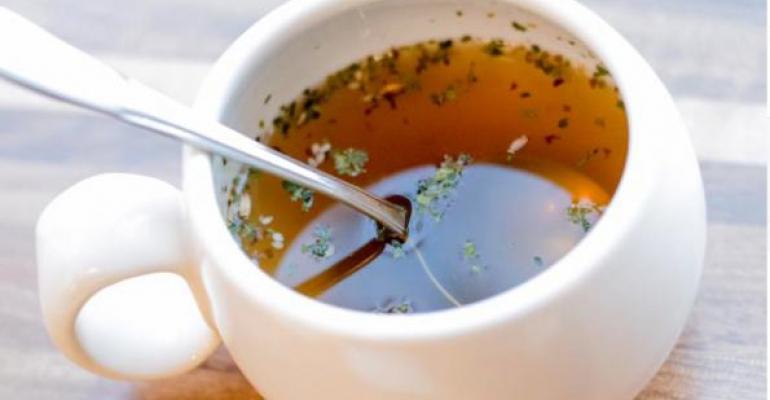 Given the torrent of publicity bone broth received in 2015, you’d think more restaurants would have it on their menus by now. Few do, despite the drink’s hefty margins and its still-growing consumer base. Two bone broth-based concepts have opened this spring, but if you’re looking for an under-exploited specialty category where there’s little competition, bone broth could be it.

There are plenty of brothaholics to go after. Foodies sip it straight as a restorative beverage or pour it over add-ins to make a customized bowl. Bone broth remains the go-to drink of choice for paleo diet followers because the drink is rich with minerals, collagens, and amino acids. Its healing powers hold powerful appeal among creaky-kneed seniors for whom glucosamine supplements no longer get the job done. Throw in claims that bone broth helps bikini-wearers manage cellulite and is a hangover cure without peer and the potential market looks a lot bigger than just health nuts and hipsters.

You can bet that online bone broth retailers hope restaurants don’t figure out how lucrative this market can be. They’re making a bundle on it right now. Online is where most consumers enamored of this product’s taste and purported health benefits go to buy it in bulk. The cost?  Au Bone Broth gets $149.67 per gallon, $896.74 for the 10-gallon 60-day “Healing Pack.” Yes, those decimal points are in the right place.

It’s no problem for restaurants that make their own bone broth to undercut online prices by a lot. Yet margins remain sky high because bone broth consists primarily of water bearing the flavors of bones and inexpensive mirepoix vegetables, sometimes even scraps restaurants might otherwise throw away.

Bone broth can be menued a couple of ways. It works both as a mineral-rich restorative beverage and as a flavorful base to which customers add other ingredients. Despite this versatility, it remains a fringe food in the restaurant world.

Marco Canoro, chef at New York City’s Hearth, started the bone broth revival with Brodo, a walk-up bone broth window that lead to a cookbook of the same name. He stirred up so much interest that New York could host a well-attended Broth Fest in 2015. Cost of a ticket to that event: $33.

Next came a stand-alone concept built primarily around broth. That’s Portland’s Broth Bar, which described itself as the first dedicated bone broth cafe in the country when it opened last summer. Its menu provides both a simple sipping option or a hearty bowl, depending on the customer’s whim.

Alternatively, patrons choose a broth base and add extra ingredients chosen from a 17-option list. Choices range from hits of fresh pomegranate juice or garlic puree for $.75 apiece; organic kombu flakes or spirulina for $1; or chaga mushroom extract or cocoa butter & coconut cream for $2 each.

Bone broth even works out in cowboy country. At Bone Broth Noodles in Belgrade, MT, it’s a cornerstone of the concept’s Vietnamese cuisine. Belgrade is also home of Montana Wagyu Cattle Company, ensuring a steady local supply of bones and beef.

““The Asian people, we’ve known the good things about bone broth for a long time,” says co-owner Kevin Nguyen. “You have to know how to cook it correctly, though.”

You don’t necessarily have to go all in if you want to give bone broth a try. At  least one manufacturer is making it easy for restaurants to get in the game.

At the year’s NRA show Nona Lim debuted foodservice packs (four one-gallon containers, shipped chilled) of Thai Curry and Lime bone broth, Vietnamese Pho bone broth and Miso Ramen Vegan bone broth. These products might be a little tricky to source; they’re distributed through the natural foods channel. But with the right line-up of add-ins, your restaurant could be in the bone broth bowl business as soon as you can open the case and heat its contents.

Forty-one percent of chefs surveyed for the NRA’s “What’s Hot” prediction list tabbed bone broth as a hot trend for 2016. Even if a by-the-cup approach wouldn’t work for your operation, an accessorize-your-own bone broth bowl bar or your take on Asian noodle bowls just might.