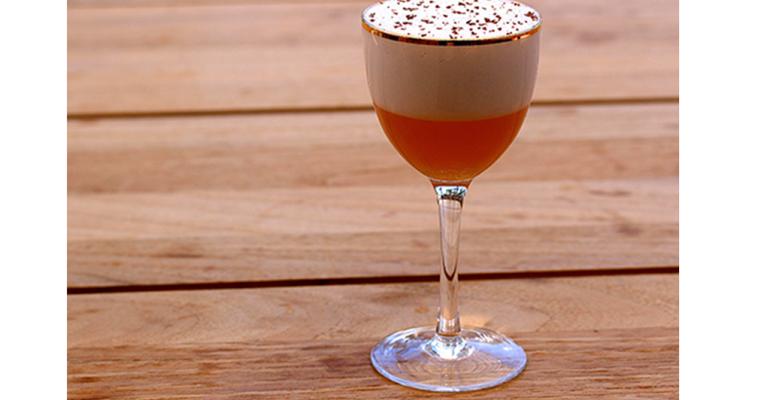 <p>The Hotline Sling from Cafe Gratitude, Newport Beach, CA, incorporates aquafaba for this velvety foam. The bean product is not only vegan-friendly, but lets operators eschew the odor and bacteria problems that can accompany egg whites.</p>
Food & Drink>Food Trends

Vegans and the restaurants that serve them are preparing dishes with a new egg white replacement. Are you ready for the bean water movement?

Vegans have been searching for a viable egg replacement for years, but, according to aquafaba.com, it wasn’t until late 2014 that French chef Joël Roessel discovered that bean water could form foam. In February 2015, a U.S. software engineer, Goose Wohlt, was also experimenting with vegan egg whites and came across a video showing the possibilities of bean water, or aquafaba, and soon after helped to spread the aquafaba gospel.

Today, there are websites and online communities dedicated to the humble liquid that was once washed down the drain. Chefs and bartenders are using the clever discovery in desserts, breads, mayo, cheese, cocktails and more, with the general replacement recommendation being three tablespoons of Aquafaba for every egg white.

“I’ve been experimenting with Aquafaba for the last six months after reading about it in a Tales of the Cocktail newsletter,” says Megan Deschaine, bar manager at 492 in Charleston, SC. “The restaurant I’m at makes hummus from scratch, so, what would otherwise be considered waste, became one of my favorite ingredients to explore.”

“We began using aquafaba in our baked goods at Perelandra about a year ago. Our kitchen and bakery are vegan and we've historically used flax seed meal as an egg replacer/binder,” says Allison Buckingham, co-owner of Perelandra Natural Foods in Brooklyn, NY. “It helps add texture and works great as a binder. It also has the unique quality of whipping into peaks like egg whites, so our team is able create unique vegan desserts, like mousse and macaroons. It's an excellent egg substitute in baked goods and doesn't add the beany flavor that you might expect.”

“Any cocktail that’s considered a traditional sour makes for a great option to use the chickpea water,” says Deschaine. “We use one ounce of aquafaba in substitution of what would be one egg white in a cocktail.”

Jane Danger, beverage director at Mother of Pearl in New York City, says she’s been using aquafaba for a year. “We use aquafaba in classic cocktails that call for egg and cream to be a replacement,” says Danger. “Right now it's a special we have on—Pisco sour, silver gin fizz, whiskey sour. They are really popular. It's a fun new texture, and unlike egg white, you can flavor the aquafaba beforehand. We use vanilla and orange blossom water.”

Jason Eisner, bar manager at Gracias Madre in Los Angeles and Cafe Gratitude in Newport Beach, CA, says each restaurant currently uses aquafaba in two of its signature cocktails. “Aquafaba is a magnificent egg white replacer in cocktails,” says Eisner. “The primary use of egg white in classic cocktails was to create a velvety mouth feel, however, egg white can have a very off-putting aroma and flavor, and, because they are used raw, there's an obvious risk of bacterial infection.

“As a longtime bartender, I've often felt that creating a consistent head with egg whites was also an issue,” says Eisner. “However, aquafaba has no distinct odor or flavor, no risk of bacterial infection, is super consistent, and can be purchased organic and vegan. It's also incredibly inexpensive, so using aquafaba is actually a really great financial decision.”

Deschaine agrees that aquafaba can be more functionally and financially viable in the bar than egg whites, especially for bars in restaurants that make their own hummus. “We have found that by freezing it in 1" x 1" silicon ice molds, we can easily preserve it, while also conveniently using it in any cocktail that calls for it,” she says.

“I hope that with increased exposure, an ingredient as useful as this one will become better understood and utilized,” adds Deschaine. “I certainly don't consider it a gimmick.”