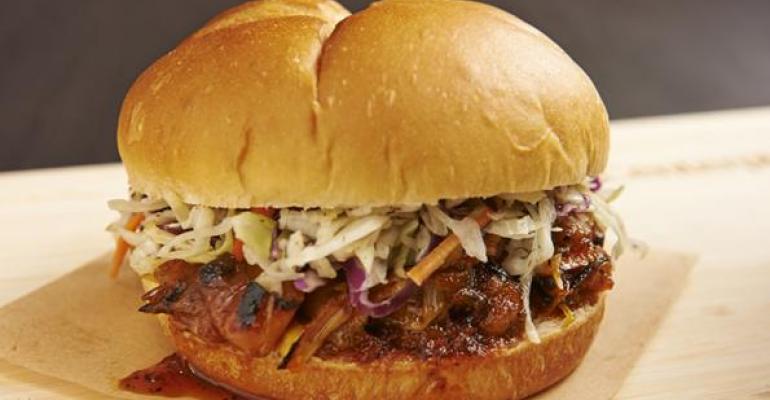 Another take on 2017 restaurant trends

Plenty of new items will spice up the food world next year; others are ahead of their time

Khachapuri, brinner, crowlers: you’ll need to expand your vocabulary if some of the items that made Food and Drink Resources’ (FDR) predictions for 2017 trends catch on. And catch on they might.

FDR’s first crack at forecasting food trends last year accurately foresaw many of the new ideas that took hold in restaurants in 2016.

So what do the prognosticators at this Denver-based food consultancy see on the horizon? Here are some of the key food trends FDR thinks will impact the restaurant world in 2017.

• Khachapuri. It’s “a Georgian (country, not U.S. state) dish of bread, cheese, and eggs,” FDR explains. “It’s a lot like American-style pizza or cheese bread with an egg on top, and it is delicious.” This video shows how to prepare this dish, which could redefine hearty eating if it finds a market.

• Seaweed, which FDR dubs “the new kale.” Much of it will be used to make kombu, the umami-rich flavor booster that’s a key element in many Japanese dishes.

• Harissa, a North African chile paste that explores the next level of heat and flavor beyond sriracha. Restaurants could make their own in-house.

• Plant-based proteins. The news here is that meatless entrees, typically grain-based, have become must-haves in the eyes of many restaurant-goers. Their new favorites? Barley and farrow. “People really are tired of quinoa and are looking to other high-protein grains,” FDR argues.

• Jackfruit, a high-yielding, shreddable fruit that works as a substitute for meat in certain applications. Also, dragonfruit, which FDR thinks could become the next acai, thanks to the high levels of antioxidants it provides. • Heat treatments. FDR think the on-table burning herbal scents paired to accompany desserts or other items at some restaurants in France could find a home in the U.S. It also sees restaurants that employ open fire cooking switching to compressed sawdust fire logs because they “take up little space and burn real hot.”

• Crowlers. Craft brew aficionados already fill their personal growlers with their preferred microbrews and transport them home for future consumption. Now brewers are getting in on the act by putting beer in oversized cans, 32 oz. and 750 ml being the go-to sizes so far.

• Nikkei cuisine. Food from Peru has made numerous trend lists over the years but has yet to catch on in a big way. Operators might have better luck if they blend it with elements of Japanese cuisine. “Japan and Peru have a long cultural history between them, which has resulted in a melding of ingredients and techniques,” FDR says. Need evidence? The Nobu empire is built on a version of chef Nobu Matsuhisa’s personal take on Nikkei-style food.

Food and Drink Resources also produces a list of what it dubs “2017 Unusual Food Trends.” It consists of items and ideas that have generated some publicity in the food world but might be just slightly ahead of their time. The big caveat from FDR on these trends: “Honestly, we can’t stomach them or don’t expect them to go mainstream anytime soon despite the buzz.”

• Savory yogurt. These products have gained shelf space in some supermarkets and might make it into the foodservice world. With powerful companies like Nestle and General Mills now pushing the “surprisingly savory” category, there might be new demand generated that hasn’t been out there so far. “While you’ll see more savory, we’re not guaranteeing you’ll like it,” FDR says.

• Bugs. Wildly prolific insects would definitely be an ideal way to produce abundant protein-rich foods for the masses. But they are still way, way out there on the fringe of what restaurant customers want to eat. “We’re thinking not-so-much,” FDR says. “Though we respect the debate.”

• Offal. Nose-to-tail eating has gained a little traction in the restaurant world, particularly among some high-profile chefs. But isn’t likely to gain much more. “For those who grew up in rural areas, it may not seem strange to eat internal organs of animals. For the rest of us? Whoa.”

• Sustainable proteins. Aren’t restaurant customers demanding more sustainable fare? They are, but while low-impact proteins such as goat, rabbit and carp already appear on a few menus, FDR isn’t buying in. “While we see it happening, it still doesn’t feel exciting. Waiting for someone to show us otherwise.”