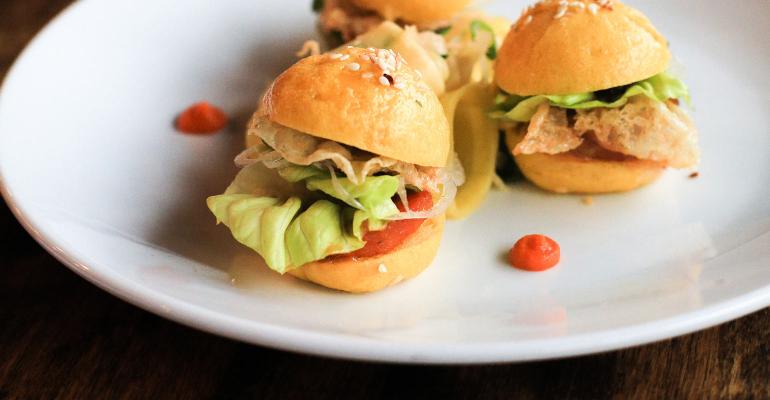 Amanda Cohen is one of the only high-profile chefs in the United States who doesn’t even pay lip service to the idea of sourcing local, seasonal produce.

“Eh. I get ’em where I can get ’em, and what I can afford,” she says — a pretty relaxed statement for any chef, especially one in highly competitive New York City. But what’s really striking about Cohen’s comment is that she’s the chef and owner of the vegetarian restaurant Dirt Candy.

She did recently buy some ramps when they were in season, for the first time in the history of the restaurant, which turns nine years old in October.

“They’ve never been exciting enough for me,” she says of the highly prized wild onions, “and I feel like the worship at the altar of ramps is a little excessive these days.

“But I work with a forager and she was like, ‘I don’t want to pick the whole ramp. If I just pick the leaves,’ which are the sustainable part [because the leaves will regrow if you don’t harvest the bulbs], ‘will you take them?’ And I said ‘yes’.”

Ah, so although local and seasonal is not Cohen’s thing, sustainability is, right?

Is it vegetarianism then?

“The restaurant’s vegetarian, but that’s happenstance,” says Cohen, who’s not a vegetarian herself.

“If I liked meat, then I would cook meat. I don’t. I have yet to find a piece of meat that makes a vegetable taste better.”

And that’s her mission. She named the restaurant Dirt Candy because she thinks of vegetables as treats that grow in the ground.

“We’re trying to show that basic vegetables can be delicious in all different ways,” she says. “It’s not necessarily the luxury ingredient or the hard-to-find ingredient. That’s great when you can put it on a dish, but that doesn’t always make the dish.”

And when Cohen first opened Dirt Candy at its old, tiny location — what she now calls “little Dirt Candy” since she relocated the restaurant two and a half years ago — purveyors wouldn’t sell her the good stuff anyway.

“We had no storage and so I could get what I could get from a couple of my purveyors, and I was like, ‘Hey, I hear there’s a really fancy carrot out there. Can you get it for me?’ and they’d be like, ‘No. I’m gonna get you carrots and you only want five, so take it or leave it’.” New York’s Dirt Candy relocated to a larger space a couple of years ago, allowing Cohen to store more product and gain access to new purveyors with unique ingredients.

As for the ramps, Cohen bought 100 pounds of them — leaves only — and pickled them by pouring a hot brine of olive oil, white vinegar and garlic over them and storing them in her walk-in. They’re finely chopped, mixed with ricotta and used in an onion-themed dish: She purées red onions, skin and all, and mixes that with flour to make pink tortellini (“It’s never quite as red as I want it to be,” Cohen says), which she stuffs with the ramps and ricotta.

They’re served in a broth made from burnt onions — charred whole on the grill so they’re black on the outside and “juicy and brown” on the inside — and garnished with dehydrated grapefruit.

Cohen says that’s not a dish that would have gone over with her customers nine years ago, not because of the onion theme — all of the dishes on her dinner menu are based on one vegetable in several iterations — but because of the pasta in broth.

“We had a really hard time in the beginning if we were trying to serve pasta in a thinner broth,” Cohen says. “People were like, ‘No, we want it to be heavy’ … We did a lot with yogurts, and that was fine, but if it was a thin broth, people were like, ‘Absolutely not’.”

She doubts they would have gone for her pepper dish, either.

“It’s very Instagrammable,’ she says. “It’s adorable, but I’m not sure if it would have gone over,” because it’s subtle and sophisticated.

The dish is served in a skillet with six or seven different kinds of dried peppers and tiny white beans called haricots coco, along with Sichuan pepper-crusted trumpet royale mushrooms, and bell peppers cut into rings like Life Savers.

“You have to be accepting of the pepper flavor, and you sort of have to find it, and then it hits you,” she says, adding that that kind of subtlety is missed on many diners these days.

“This idea [that] big flavor is the only way to go I think has sort of taken over … It’s the same thing with the onion dish; the onion dish is much more subtle, too. But we ask people to find the flavor and texture and sort of let the flavor come to them.”

She blames this shift in American tastes in part on the fact that most trendy restaurants these days serve small or shared plates of powerfully flavored foods.

“We’re losing entrée restaurants, so we’re really losing the art of finding the flavor of things,” she says.

That’s a shame, she says, because vegetables can take awhile to get to know, and they’re rarely one-dimensional.

“We want to show you the different flavors of vegetables, and its not always that first vegetable flavor that you know. Like, ‘Oh, a carrot. It’s sweet.’ Well, sometimes a carrot can be smoky; sometimes it can be bitter; sometimes it can, I don’t know, be a little sour. There are so many different flavors, but you get stuck in your head with what a vegetable should taste like, and when we try to show people that it’s different, they want it deep-fried and spicy.”

Cohen might have been thinking of her jalapeño hush puppies when she said that. Served with maple butter, they have been on her menu since the restaurant opened.

“I think the restaurant’s gone beyond that now, but they’re definitely a fan favorite, so it’s hard to move past that,” she says.

“After nine years, I’m sort of done with them.”

But business is good. Cohen says Dirt Candy’s enjoying its most lucrative summer yet, driven not by higher traffic but by more customers buying tasting menus.

“Things are excellent,” she says.

She also likes her cooking more than she used to.

That has come from a give-and-take between her and her guests.

“There’s a lot of back-and-forth between my customers and me figuring out what would work the best for them,” she said.

Her next test for them: Lettuce soup.

She’s not exactly sure what it will be like, as it’s still in development, but she thinks it will be refreshing to have lettuce in a way other than grilled on in a salad. And it will be hot, because apart from gazpacho, she’s not a fan of cold soup, which at any rate don’t tend to sell very well, even at the height of summer.

And she has had success with here kale matzoh ball soup. It’s made with tiny matzoh balls made with matzoh meal and kale purée, served in a kale galangal broth with a poached egg, or fresh tofu for vegans, which she purchases nearby in Chinatown.

Creating new dishes for Dirt Candy can take three months — which is one reason she avoids hyper-seasonal items — because, Cohen says, with each dish she’s trying to evolve vegetable cuisine.

“I’m not starting out with a book here,” she says, noting that there’s not exactly an ancient tradition of figuring out 16 different ways to prepare eggplant for a single dish.

“Each dish is a new sort of little project,” she says. “I have to figure out what vegetable I’m using and what flavors I want to use and what’s going to inspire me with that dish, and it just takes a lot of time.”

She says sometimes a dish comes out great, but if it takes 20 hours to make than it’s not going to work. “So we have to figure out how to simplify it and how they’re going to plate it.”

She thinks the restaurant’s next showstopper is a dessert she’s collaborating on with pastry chef Shannon Murphy: Eggplant Foster, cooked tableside and served with lemon ice cream and eggplant cookies.

Yes, the vegetable theme at Dirt Candy extends to desserts, and cocktails, too, like the Piña Kale-atta, made with pineapple, coconut, rum and juiced kale.

“You get your daily fill of vegetables here,” she says.