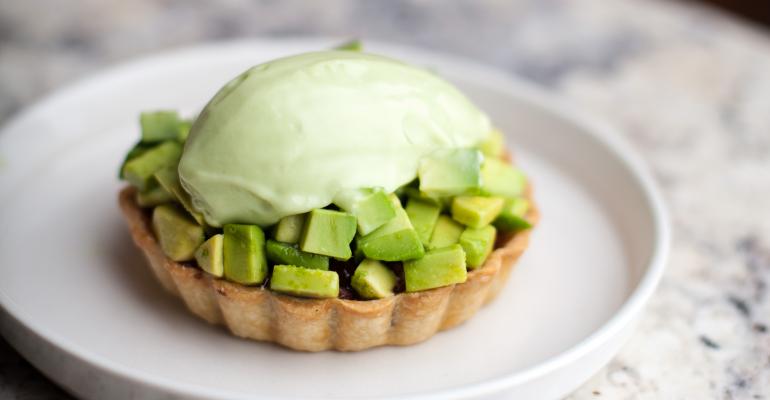 Whether sweet, savory, pickled or simply amplified with the perfect accent, avocado’s star power is ripe for the picking

It’s a fruit, it’s buttery, it’s a “good fat," and it’s so much more than a topping for toast. Here's avocado three ways.

Named for a song by Minneapolis rock ‘n roll legends The Replacements, Heyday is a restaurant with a wild attitude all its own. Wild food is part of that vibe. Chef Jim Christiansen honed his skills with foraging menu magic at Noma in Copenhagen, pretty much the epicenter of New Nordic Cuisine. He’s found a few innovative ways to use avocados at Heyday, including a savory tart with chicken liver mousse and pickled avocado, and this dessert: salty caramel pecan pie with avocado marmalade. Pomegranate seeds are the tiny, jewel-toned keys to unlocking the secrets of everyday guacamole. Perhaps the best-known snack application for avocados in this country, guacamole gets a wakeup call with the simple addition of these little ruby red babies. “Pomegranate is sour and sweet and it balances the spicy, salty taste of the guacamole beautifully,” says Luis Davila, chef at Citrico. “It also adds a surprising burst of texture to every bite.” Avocado and cherry tomatoes with pine nuts and lime-cilantro vinaigrette

Lemonade is a chain of cafeterias that burst onto the fast casual-in-California scene as a bright spot for seasonal food in a fun setting. This avocado-centric salad is one of the most beloved items on the menu. Chef Alan Jackson created it as a reinvention of guacamole as a salad, and it’s familiar yet different thanks to the texture, amped up flavors from the tangy vinaigrette and the slightly unexpected yet so-California addition of pine nuts.