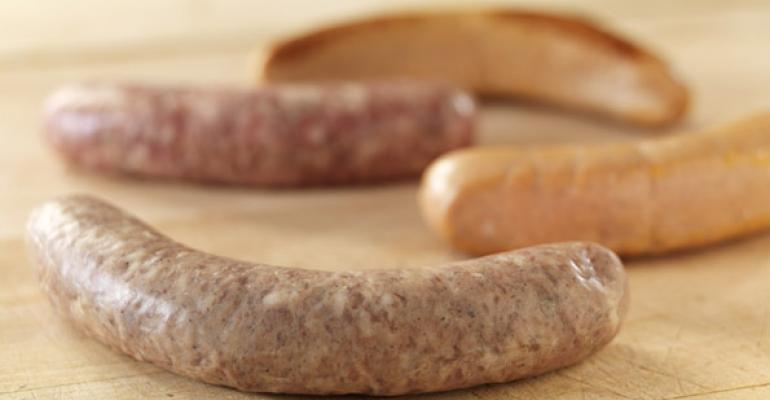 Whoever first said you don’t want to see how sausage is made never met Chris Mattera. The co-owner of Sausage Craft is more than a little passionate about making sausage. His technique is equal parts science and art, and his almost three-year-old wholesale sausage shop is now thriving in Richmond, VA, selling almost 2,000 pounds of hand-made sausage a week, mostly to independent restaurants in the area.

The business plan was hatched after “one of those days in retail when you really don’t want to be in retail,” Mattera says. He was the production manager of a butcher shop and his buddy, Brad Hemp, was in sales and handled the wines and cheeses.

“I said wouldn’t it be great if we had a place where all I did was make sausage and all you did was sell it,” Mattera says. “And we laughed.”

But the seed was planted, and they later sat down at his dining room table and wrote a business plan. They left their jobs and opened Sausage Craft in November of 2010. They started out making and selling 200 pounds of sausage in a good week, primarily targeting independent restaurants with chefs who made their own sausages but maybe wished they didn’t.

“Hey, I understand the urge of wanting to do it yourself—it’s why I got into it—but it’s a lot of work, messy and it needs to be done in a very specific way,” Mattera says of the challenge for restaurants. “Very few restaurants frankly have the time and space to execute it in a way that is really good. If you can do it, and do it well, and it’s not screwing up everything else on the prep list and line, by all means, do it. “

Otherwise, he says, find a local artisanal shop that can help. Mattera, who graduated from Virginia Tech and Le Cordon Bleu Paris Academy of Cuisine, trained under a third-generation Tuscan butcher in San Miniato, Italy, and then worked in restaurants and retail, offers these seven tips for making sausage.

1. The quality and freshness of the meat and fat are paramount. “If it’s lean meat and the fat is no good, the sausage won’t be good,” he says. “You can’t overcome that.” You must have the appropriate pH levels, which affect the water holding capacity. If it’s not right, it can cause a dry and crumbly product, or a mushy one. Look for pork that isn’t pale and watery, or really dark. You want that “gorgeous rose pink verging on a little darker,” he says. The fat is just as important. It should be creamy white and hard enough so you can’t put your finger through it.

2. Ration the meat to the fat. You can play with this, Mattera says, but the fat should be between 20 percent and 30 percent of the mix. If you’re using a pork butt, there’s some fat already in there that factors into the equation.

3. Find the right balance of proteins in your pork. The cut of meat matters, and you want both lean meat and stromal proteins (connective tissue). The latter helps bind the water. Mattera says the easiest route for restaurants is using a pork butt, because it offers a nice balance of lean meat, connective tissue and fat.

4. Experiment with the grind. How you grind it impacts the sausage. Where he trained in Italy, he says everything was finely ground, which created uniformity in texture. But he says you don’t have to do that, and can experiment and even mix coarse and fine grinding in the same sausage. It’s a matter of taste and technique.

5. Salt is incredibly important. You need salt for functionality (it helps with the bind and can prolong shelf life), but also for flavor. It’s “what makes a sausage a sausage,” Mattera says. His rule of thumb is between 15 and 25 grams of salt per kilo of meat, but he advises caution because today’s consumers are salt-sensitive.

6. Start basic and layer in other ingredients. Mattera starts cautiously and underseasons because he believes it’s easier to add more rather than trying to figure out what you need less of. “It’s like a chorus. Everything needs to sing in harmony.” Exercise restraint.

7. It all comes together in the mixing. “You don’t want a bite of coriander and a bite of salt. The mixing distributes all those flavors,” he says, and is often an overlooked step. “You need to make sure all the proteins have the chance to bind.” There are two counter sides to the protein—hydrophilic and hydrophobic—that he compares to an eight-grade dance: “Remember how it started, with everyone up against the wall on opposite sides? Then after a while everyone starts to move around and then everyone finds their dance partner.” You want those proteins to do the same, and you have to “prime the pump to get them dancing,” he says. After the mixing, the ball of ground meat should feel like it is moving as a single piece of meat.