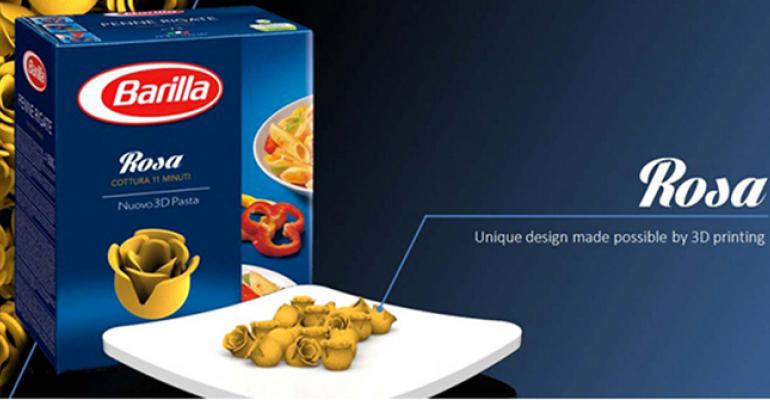 There's good news for operators curious about the viability of 3D food printing capability. An actual program, run under the auspices of the Culinary Institute of America, is aimed at making this emerging technology accessible to people who work in professional kitchens.

As evidenced at the just-concluded Consumer Electronics Show in Las Vegas, 3D printing capabilities are growing at an exponential rate. Astronauts use them to make tools while circling the globe on the International Space Station, space. Here on earth, the devices allow college engineering students to make low-cost prosthetic arms and hands for kids whose parents can’t otherwise afford them. A dizzying array of other mind-bending applications is under development as the 3D printing industry expands.

But 3D printing’s impact on the restaurant world has, so far, been minimal. Only a handful of chefs are familiar with edible 3D printing, and currently available printers can’t produce food fast enough to meet the demands of busy commercial kitchens. That may change in a hurry, now that the Culinary Institute of America will be teaching people how to use 3D food printers and much-faster printers are ready to hit the market.

For its project, the CIA is partnering with Rock Hill, SC-based 3D Systems, which manufactures the Chef Jet Printer, explained here:

“Through our partnership with 3D Systems, The Culinary Institute of America will elevate 3D printing technology by integrating it into our curriculum so that current CIA students, alumni and culinary professionals can have access to this new platform in the future,” says CIA president Tim Ryan.

“I am excited to see how this technology will open opportunities to chefs as they explore its creative, design and functional capabilities using new techniques that will integrate 3D printing into the professional kitchen.”

Hands-on conferences and seminars held at CIA facilities equipped with cutting-edge 3D printers will be just one facet of the educational opportunities this program will offer. Good thing, because there’s definitely a lot to learn. Check out this recipe for 3D printed hummus at the highly useful 3digitalcooks website to get a feel for what’s involved.

TNO does work for many industries from its 22 research facilities in The Netherlands. For Barilla, it’s developing a 3D printer that can produce innovative pasta shapes at busy restaurant speeds. The current version of the printer may not be quite there yet, but it’s getting close. It can to produce up to 10 pieces per minute–10 times faster than earlier models.

Customization is the key benefit of this approach.

“Suppose you are married for 25 years, you go out to eat and you want to surprise your wife with pasta in the shape of a rose,” TNO’s Kjeld van Bommel says. “If you have a design with you on a USB flash drive, the printer can make it."

Is this really a big deal? Well, a recent winner in a Barilla-sponsored 3D pasta printing contest was indeed in the shape of a rose, one that blooms while it cooks. Plug-and-play pasta could be a big hit for restaurants that attract lots of families with kids.

Pastry chefs may want to keep an eye on XYZPrinting’s Da Vinci 3D food printer.  It can handle both chocolate and dough to produce oven-ready cookies and pastries. It also produces intricate decorations for cakes.

The idea is that customers will download a food design from the company’s cloud-based service and bake off the results. It’s a consumer-level product, but could be adapted for restaurant use. Foodini, a 3D food printer from Natural Machines, is also aimed at the home user.

The big question with 3D food printing is that while technology now makes it possible, will restaurant customers care? It’s too early in the game to answer that question, but it should be interesting to see what CIA-trained culinarians produce using these printers. Right now, the food suggestions come from tech types; let’s see what happens when forward-looking chefs figure this process out.