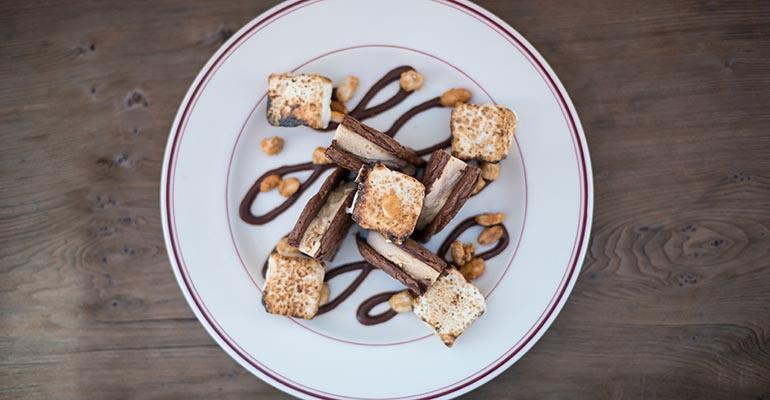 The handheld dessert offers that campfire feeling year round

As summer wanes, the instinct is to gather around the campfire to hold onto the season a little longer, maybe even all year. There’s one dessert that can help accomplish this: s’mores.

Moving from the campfire to the high-end wood-fired oven, s’mores have been transcending settings and seasons. And as we move into fall, s’mores are sticking around. After all, there’s nothing particularly seasonal about melty chocolate, gooey marshmallow and good ol’ graham crackers. Put these ingredients into the hands of a curious, fun-loving chef, and the results are s’mores for all seasons. Laura Bellucci, who presides over the bar of SoBou, a Creole saloon in the French Quarter, sees the bar as “a place to escape the orderliness of life,” and this s’mores cocktail transports the sipper straight to a booze-fueled campfire. It’s a stiff yet playfully sticky drink made with High West Campfire Whiskey (a product from Utah that blends Scotch, bourbon and rye whiskeys), granola-infused crème de cacao and black walnut bitters. It’s garnished with a housemade whiskey marshmallow and a graham cracker rim on the glass. Cue the ghost stories! Michael Mina is a famous defender of comfort food’s place on the menu, and at Pizza & Burger, his casual place in the Fontainebleau, he’s found a real playground. (Lobster corn dogs, anyone?) His decadent s’mores dessert is simple and straightforward, going directly to the palate’s memory center. But it’s somehow richer than memories of s’mores past, with housemade graham cracker crumble; a luxe chocolate brownie; and vanilla marshmallows melted, charred and caramelized. This is nostalgia done right. Chefs turn to sandwiches as a vehicle for vegetarian food
Jun 12, 2020